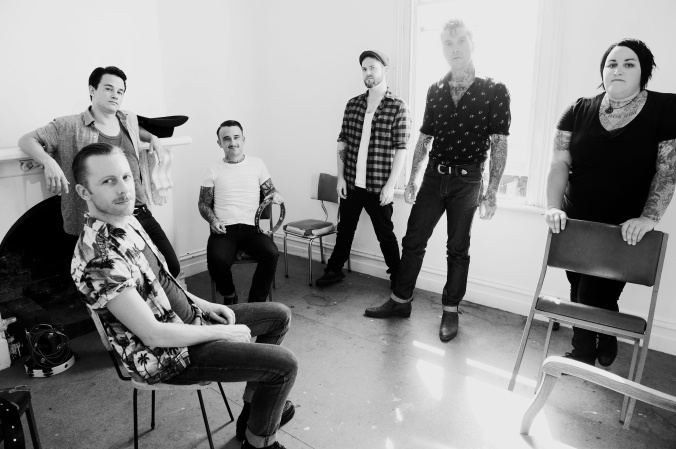 This morning, via the band’s Facebook page, King Cannons singer Luke Yeoward confirmed what had been feared for some time: the Melbourne via New Zealand rock darlings have split up. His message reads:

“Unfortunately the news is true, gang… Thank you all from the bottom of my heart for the support over the years. So many great experiences, great people, and great laugh’s along the journey. Life changing stuff, really. Massive love and respect to each and every one of you. Honestly. Onwards and upwards – Luke Yeoward”

I wrote this review many months ago, but have never posted it on here until now. Here it is, in honour of the one of the best rock ‘n’ roll bands of recent years (and also the third best live show I’ve ever been to).

King Cannons are a hardworking band, and they want you to know it. They have fought poverty and hardship every day of their existence to be together. Their songs are full of cliché and nostalgia, being almost exclusively about being flat broke, escaping the oppressive factory dust, and the joys of finding solace in rock ‘n’ roll and the open road. They aren’t exactly original in style or substance, stealing from the slicked-back greaser ’50s style of American rock, to the angry punk-with-a-heart teachings of ’70s Joe Strummer, the anthemic bombast and big drums of ’80s Springsteen, with a sprinkling of the blue-collar working man‘s plight of ‘00s Gaslight Anthem. Okay, that’s the bad news out of the way.

The good news is that the hard-rocking New Zealand quintet are one of the most exciting new rock ‘n’ roll bands of the last couple of years, with an incendiary live show and now a debut record to match. They take what will already be familiar to many a music fan and apply their own steadfast conviction and earnestness to it, using their influences as a driving force rather than allowing them to be a disadvantage. They want you to know that it’s okay to dream and it’s okay to want something better, and their own back story told through their songs will just about inspire you to do anything you want.

Singer and sole songwriter of King Cannons, Luke Yeoward, lived the working man’s lifestyle until only a few months ago. A mill worker or furniture removalist by day, he wrote songs in his spare time and played Auckland’s dive bars by night. After the band released their first self-titled EP in 2010 and it began getting serious airplay on Australian radio (mostly focussing on the excellent ‘Take The Rock’ single), they packed up their small amount of gear and moved to Melbourne; the route for many a Kiwi band wanting to take their career further. There they met fellow Kiwi, producer, and Shihad drummer, Tom Larkin, who offered to man the dials on their debut record. It was a fortuitous meeting; the experienced sticksman going on to fill the drum stool on a national tour of the country as the band’s current drummer was fulfilling other commitments in the States. King Cannons have toured incessantly in the last couple of years, and the result of all their hard work is the debut album The Brightest Light.

“Change is coming, I’ve been told” sings the gravely-throated Yeoward on opening track ‘Stand Right Up’, over an unconventional intro combination of Lanae Eruera’s bongos and handclaps, before the full band kicks in to make a rolling anthem spring to life. “We’ve been all riled up, now we don’t sit true, flip that coin is what we’re gonna do,” he continues, and it’s instantly clear he means every word.

By second track ‘Too Young’ you’ll realise that King Cannons like getting straight to the point. “We’re too young to settle down, fighting the workers battleground,” is the opening line, before another barrelling, joint guitar and keyboard riff kicks in, sounding like some of The Hold Steady’s rockier moments. “Sixteen, working in factory, breathing that dust five days a week, rather be rocking with the gang all night, needed a living, didn’t want a life,” could be King Cannons’ mantra. The first two tracks signal the intent of this album and sum up just about everything the band stands for.

After the quick one-two opening salvo comes the title track. It begins as a slow burner with Yeoward dropping the wonderfully descriptive Springsteen-esque line “There’s something about a mid-summer’s Friday night, the smell of the grass and gasoline,” before erupting into a pounding, smashing chorus that explodes with the joys of summer and being free. It’s quite the heady, uplifting anthem.

Fourth track ‘Too Hot To Handle’ adds a bit of soulful funk into the mix, complete with shout-y chorus and a grinding guitar riff; less rocky than the first two tracks yet standing alone as an excellent album track in itself.

‘Call For Help’ again features bongos in spades, as Yeoward indulges in some storytelling about having his ass kicked by the big city. “Went down to Otto’s and drank all the booze, saw a conga band play in ninja suits, went to Manitoba’s but they wouldn’t let me in, I guess that New York wins again”. Call for help, indeed.

‘Shot To Kill’ and ‘Ride Again’ could be two parts of the one song; both being mid-pace rockers that wouldn’t sound out of place on a Gaslight Anthem album, before ‘Charlie O’ introduces some Caribbean rhythm and groove in a laid-back, funky track that shows the band’s versatility, and allows Yeoward’s baritone voice to shine through. In a recent interview Yeoward said it took him a long time to learn how to sing properly, preferring to get drunk and shout at the microphone in his punk band days, but from this evidence that’s not apparent at all.

‘On Our Own’ is a fantastic story of friendship and lending a helping hand, and shows the band’s Americana influences. “All we can do is trust, be true, and keep our heads above water, and stay out of that box”. Amen to that.

‘Everyman’s Tale’ follows, and provides another pleasant surprise by being a gentle acoustic track, somewhat melancholy yet still bursting with the feeling of being free and the right to choose your own destiny. The execution is different, but the message is consistent.

Final track ‘The Last Post’ finishes The Brightest Light on a high; it’s a soaring anthem that sticks to the sentiments of the entire album, a statement on the pointlessness of war, and an urging for more hope for the future. A great finish.

King Cannons want to be your favourite rock band, and they’re prepared to work until their hands bleed and their backs ache to earn that title. More importantly, their honest, workmanlike approach is incredibly refreshing in a time when earning an internet following seems to be more important than an on-the-road one for new bands. Call them old-school, call them blue-collar, call them whatever you want; it’s down-to-earth rock ‘n’ roll at its finest.

P.S. – I saw King Cannons recently in an intimate venue and something strange happened. I’m not a dancer; I prefer to watch a band and take as much in as possible, but these guys had me bouncing and screaming with excitement like a little girl, and there was only a minimal amount of beer involved. That’s music for you.