WITH a forty-year career and string of bonafide punk-pop classics under his belt, Buzzcocks frontman Pete Shelley could be forgiven for wanting to slow down and take stock. In true punk fashion, however, that’s exactly what the 60 year-old is not doing.

The frontman and songwriter of ‘Orgasm Addict’ and ‘Ever Fallen In Love (With Someone You Shouldn’t’ve)’ is taking his band on a world tour to celebrate four decades in the business. Just don’t expect the understated and softly-spoken Shelley to do anything but take it all in his stride.

“We’re naming all our shows this year our 40th anniversary shows,” he says. “But it’s something which has snuck up on us really. We never expected 40 years; even 40 minutes would have been stretching it when we started. We started off with small expectations and didn’t know how long we could carry on before someone stopped us. [Punk was] the most un-commercial form of music we could imagine. It was completely the antithesis of what popular or critically-acclaimed music was at the time, and that’s probably why it worked, because it wasn’t the same old, same old. I tend to see how it actually was, to keep myself from slipping into nostalgia. I think nostalgia is for other people, but it does occur to you sometimes; I think ‘Oh, there are quite a lot of good songs we’ve got’.”

The quartet, also including long-serving guitarist Steve Diggle, are bringing their glorious punk-pop anthems to Australia to play Golden Plains Festival and a string of state capital shows. Preparations have begun in earnest.

“We started rehearsals on Wednesday and have a list that is 48 songs long,” Shelley says. “There’s no way we’re going to be able to play all 48 at one gig. We’re trying to get up to speed on enough songs so, during the year, we can chop and change to keep it fresh, instead of having the same 20 songs being played all the time. I think I’ve written about 120-130 songs, or maybe up to 150. Even choosing 48 out of those; there are still lots of ones I’d forgotten I’d written, so I suppose we’ve got an expansive piece of cloth to cut our modest garments on.”

While the vast majority of bands from the original wave of punk are long gone, Buzzcocks have endured line-up changes, break-ups, and the stress of putting together nine studio albums and countless tours. The secret to the band’s longevity is simple, Shelley insists.

“I think the obvious reason is we couldn’t take a hint,” he laughs. “We’re almost like brothers now. I’ve probably spent more time with Steve in the past 40 years than with my own brother. We still disagree on most things, but we agree to disagree. It’s an important step in life to be able to do that [laughs].”

In an interesting twist of fate, the DIY aesthetic of ’70s punk is once again an element of Buzzcocks’ recording, with 2014’s The Way being made with the help of online crowd-funding.

“We went back and made our own album again, so we were right back to the DIY principle,” Shelley says. “It gives you the control and you have a relationship with the people who are buying your records and appreciating it. I’d rather that than getting someone else to sell it to complete strangers. You’re making music for your friends. Making an album can be quite daunting because normally it’s done in complete secrecy and nobody knows you’re doing anything, but with this, it’s a bit more transparent and people’s enthusiasm that you’re doing it is something that gets relayed to you.” 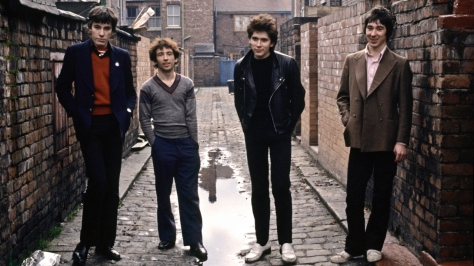 The chances of Shelley adding to his 150 tracks written isn’t exactly helped by his song-writing style. The suggestion he makes it hard for himself is laughed off in his typically understated manner.

“I’m not actively writing at the moment,” he says. “The way I write songs is, if I have an idea, I give myself the luxury of being able to forget it. When it comes back I’ll think about it some more, then forget it again. I work on the assumption if it’s such a great idea and even I forget it, it’s not all that good an idea [laughs]. I’d rather have things I can remember. When it comes down to record the music is when I crystallise the song.”

As veterans of multiple world tours, Buzzcocks know Australia well, and it’s always a good place for the band to get into tour-mode.

“I remember driving through country roads and avoiding cane toads,” Shelley says. “It’s so much different to the UK; there’s no escaping it. It’s always good to go; the people are friendly and we’ve always had a good time. I remember the first time I was in Adelaide and it was about 40 degrees and was like being in front of a blast furnace. The trip to Australia is the first of the world tour trip. Then it’s the west coast of America, France, Italy and Holland. In the UK we’re doing some festivals; the Isle of Wight Festival is one of them. It’s going to be a full year.”