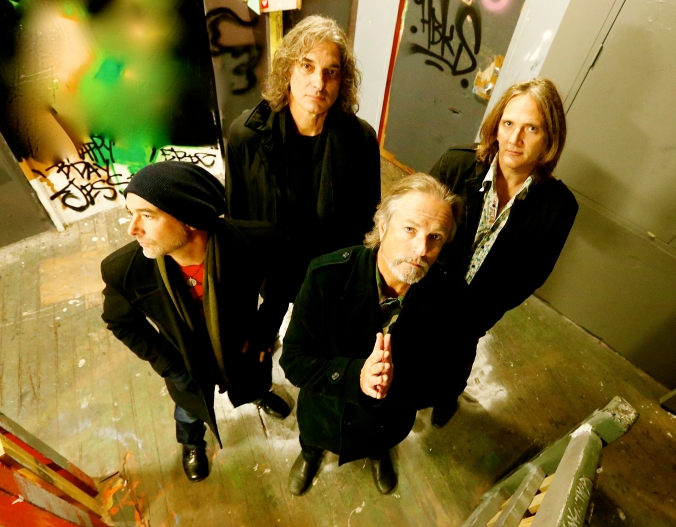 “YOU can’t take journalists on, because they have the last word. Like, if I was to really piss you off now and be really arrogant, rude and horrible, you’re going to be the one writing ‘Kilbey’s a cunt, I wouldn’t go see his fucking band at BIGSOUND’”.

This is just a sample of the type of industry advice to expect from The Church frontman Steve Kilbey, who will appear at the BIGSOUND conference as a keynote speaker with his band. Not that he’s fully sure what his role will be as yet, as becomes clear when he is asked what he expects to be speaking about.

“I don’t fucking know,” he says. “People are going to be asking me questions, aren’t they? Isn’t that how it works? I know I’m on a panel with The Church, and we sit there and field questions from the audience, and then I’m going to be on a panel with my manager and field questions about managers and artists, then I’m going to play a thirty-minute gig. I’m supposed to give you some bullshit now, but really someone said ‘hey, do you want The Church to be at BIGSOUND?’ I didn’t even know what BIGSOUND was and I was like ‘I don’t know. Yeah, I guess so.’ Some people whose advice I trust said I should go and do this and it’d be good. Everyone is saying it’s really good; I don’t really know anything about it. I’m just kind of wandering in, hoping to make the best of whatever happens to be there.”

After some initial prickliness, the 59 year-old singer and bassist becomes increasingly garrulous, self-deprecating and funny over the course of a twenty-minute interview, as he talks about his time in the music business, the benefit of hindsight and a recent change to The Church’s line-up.

“I suppose people will ask about longevity and why Marty [Willson-Piper] left and why Ian Haug joined, what our new album is like and what are the perils and pitfalls one should avoid and all that,” he says. “These are the sort of things you could ask an old seasoned trooper who has been around the tracks a few times.”

[At this point Kilbey points out that he doesn’t think he should be asked questions that might crop up at BIGSOUND, but relents when it’s pointed out that an article is being written about him, thus a requirement exists for him to say something. The floodgates then open and don’t close for fifteen minutes. Better get comfortable.]

“Alright: perils and pitfalls for musicians,” he says. “The business itself is set up – [or was] in my day at least – to take advantage of the types who could play music and knew about writing songs and stuff, but when it came to percentages and deals and someone looking after your money and all that, you just signed the contract without reading it. Also, being too emotional with the other guys in the band; taking it all out on them. I wish I had thought a lot of the time before saying things.

“I suppose walking that fine line between being successful and doing what you should be doing yourself; trying to hit that sweet spot between doing what you want to do and being successful as well – it’s hard to get that balance right. You can easily fall off that fine line and find yourself doing what you want to do and nobody is listening to it, or you can have success and it’s not the success you want to have, and it’s only going to be short-lived as there’s nothing really holding it up. Unless you’re massively successful like The Eagles or something, who can do whatever they like, to have a long career you have to try to please yourself while looking out there to see if anyone else is being pleased as well. Not living completely in the vacuum, but not folding or throwing in your hand every time you get a bad review or go through a couple of years where everyone’s ignoring you and it seems like things have plateaued. It’s all about hanging in there doggedly.

“I’ve been writing my memoirs and there have been a couple of points in the road where we quite patently did the wrong thing. Pissing off a couple of very important journalists – one in England and one in South America – by being flippant and stupid and stuff; things like that can stop your career dead. [The English journalist we upset] was a guy called Steve Sutherland. In the beginning he was our champion. This often happens with journalists – they start off as cub reporters and they write gushing reviews about you, then a few years in when they’re cleaning out their wardrobe and having a bit of a purge, it’s like a right of passage for them to start going ‘oh, this band didn’t really turn out like I’d hoped’.

“Sutherland seemed to get his hands on every one of our records from then on and give them bad reviews. He gave an album called Heyday a bad review, and it didn’t deserve a bad review because it was a great record. He compared it unfavourably to a whole bunch of English bands like Big Country and stuff like that. We were going to have the front cover of Melody Maker and this guy turned up and I fucking gave him what for; I kind of almost physically threatened him. I thought it would work, that he would put us on the cover with some story about how Kilbey tore him apart, but what he did was nothing. There was no article. I remembered that when I was raving on to him he had this smug look on his face that said ‘you can say whatever you like, because now there’s not going to be an article’.

“If the guy had just turned up and I had pretended like I hadn’t read all these bad reviews, which I can still almost quote verbatim, we would have been on the front page of Melody Maker and he might have reanointed us. I stupidly thought I could take him on, and you can’t take journalists on, because they have the last word. Like, if I was to really piss you off now and be really arrogant, rude and horrible, you’re going to be the one writing ‘Kilbey’s a cunt, I wouldn’t go see his fucking band at BIGSOUND’. At the time, I thought they were battles I could win, before realising that they aren’t.

“At the start, I was just a naive idiot who could play bass guitar, sing a little bit and write songs, and suddenly I had all these other jobs like being a leader of men. I had three other guys in my group and had to keep them under control and I had to do interviews, meet people, and be this and be that. You put one foot wrong out there and it can be all over. I’ve been lucky to have got second and third chances; I blew it tons of times with my big mouth, drug addictions, indiscretions and hopeless gigs when I turned up ill-prepared. You have to keep your eye on the ball the whole time; I don’t think as many people get as lucky as me. A lot of it is luck or simply being in the right place at the right time, and there’s something about that factor that nobody can ever manipulate or anticipate. Where is the right time? Where is the right place? Every portal that is used to get into the music business; once it’s used, it’s normally gone.

“[The music industry] is not a place for the faint-hearted and you can’t have too thin a skin, which is somewhat of a paradox for someone like me. To write all the songs I’ve written, I’ve had to be thin-skinned as [song-writing] requires a certain amount of vulnerability and thin-skinned-ness. Then, to read reviews where people are saying [your record is] the worst record they’ve ever heard, you have to be able to go ‘fuck you! I don’t believe you.’ You’ve got to be good at so many different things.

“In the beginning I was good at song-writing, not that good at playing bass, certainly not that good a singer, I was a lousy leader of men and I had everybody in the band upset. It’s a bit like being a father; I tried the strict approach and they hated me, and I tried the lenient approach and they walked all over me. That’s what being a band leader is like. When you’re like me, you’ve constantly got to be readjusting your course as you sail across the sea, moving from left to right, dodging whales and sharks and other boats, then when the wind is right you make the most of it. You’re always on your toes when you’re still relying on it to make a living.

While the by-now energetic Kilbey pauses for breath, the conversation is steered towards the future for The Church, and the band’s upcoming new album – their first since 2009.

“[Ian Haug] is an incredible, powerful guitarist,” he says. “He’s brought a lot of enthusiasm, happiness and a kind of willingness to work and make it succeed. I think he rejuvenated the other three guys; having someone whose relatively a spring chicken compared to me has helped. The first day I turned up to write a song with him I was very nervous because I had asked him into the band off my own bat; I didn’t even ask [the others]. When I turned up at Ian’s studio outside Brisbane we wrote a song within about five minutes had written the song that now closes the album. We immediately established a working pattern.

“I’m not sure how Powderfinger used to write songs, but Ian immediately fell into our way of writing, which is to fiddle around and then suddenly find something we like. He didn’t seem to have to learn the method; I’ve seen other people very confused by that method and want things already formed. When we made the album, he was just an endless source of material. It’s not like the three of us and him just hanging on there – Ian’s directly responsible for a lot of the songs. As you would expect for someone who was the guitarist in Australia’s biggest ever bands, Ian came loaded with assets and so far I can’t complain about one thing he’s done.

“I guess his status is now the other guitarist in The Church, until something changes, because it’s just a rock and roll band, and if he’s had enough or something goes wrong then so be it. Plus we’re all getting pretty old, so someone is probably going to drop off the perch and that’ll be the end of the whole thing.”

THE CHURCH APPEAR AS KEYNOTE SPEAKERS AT BIGSOUND SEP 11 AT 10AM.