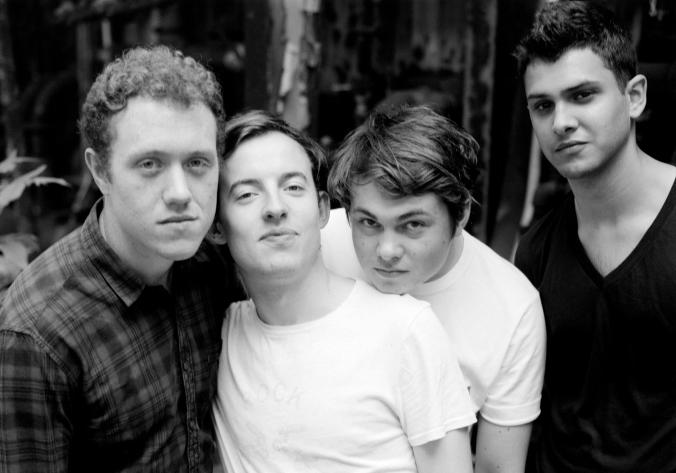 It’s been this approach that’s seen them move from being simply another indie guitar band to something altogether more multi-faceted, explains guitarist Jamie MacColl.

“I think if we did what most other bands do we would have toured our first album for two or three years, and we did the opposite of that,” he says. “Strategically, it was probably the worst thing we could do, but it came off nonetheless, and I still don’t quite know how. When we released the [first] album we were 18 or 19, and we just kept getting bored easily and wanted to try new things, so we ended up making three albums in two years. That was just representative of the fact we were young and trying to figure out what we wanted the band to sound like. I think it was only towards the end of the third album when we finally came across a sound that we were comfortable with, and the latest album has explored that further. I think it’s what the band together, really. If we just kept making early-’90s influenced indie-rock, I don’t think it would have gone on as we would have just got bored. There are so many bands who I grew up listening to – particularly indie bands – who had very successful first albums and were then unable to move on from that and got trapped by the sound of their first album. Luckily, we’ve managed to escape that”.

The band’s latest release, So Long, See You Tomorrow, features a wider range of instrumentation than before, which was inspired by frontman Jack Steadman’s travels through India. Just don’t label it ‘world music’, says MacColl.

“I think ‘world music’ is a ridiculous term in itself,” he says. “[It’s] just very lazy journalism; especially when applied to our latest album. There are a couple of prominent Bollywood songs on the record, but those are needles in the haystack in terms of the overall picture of the record. For journalists, the fact that some of the album was written in India and there’s a connection with the name, it suddenly becomes the thing that they write about. That’s wrongly come to define the album, which is a shame, but it’s certainly not world music by any means. I think – aside from the band – it’s a bit offensive to anyone who makes music that isn’t influenced by traditional western pop and classical music.”

Whatever label is pinned on it, the band will bring their new material for an Australian airing, with three shows chalked up for September.

“At this point we’ve got four albums that are all quite different to one another and we tend to try to do a bit from each of them,” MacColl says. “So, our show is interesting because it’s kind of an hour and a half of songs that don’t necessarily fit together, but I often find bands that play songs that sound the same for an hour and a half are quite boring. With us, there’s plenty to keep you interested. I think the thing that always seem to strike people who haven’t seen us before, is they expect it to be quite chilled out, both the crowd and ourselves, but that’s basically the opposite of what happens. We are a very energetic live rock band; far more than you’d expect from listening to the records. Particularly in the UK and Europe, we have gigs where the crowds tend to be quite aggressive, which I find a bit inexplicable, but it happens.”

With over 100 shows already under their belts this year, the band are set to be on top form for their Australian jaunt, but bigger things lie ahead for MacColl and the band.

“[The rest of the year] is a continuation of what we’re doing now. After Australia we’ve got another month long American tour, then a bit of South America, Europe and the UK, and a final gig of the year at Earl’s Court in London, which will be our biggest ever headline show.”