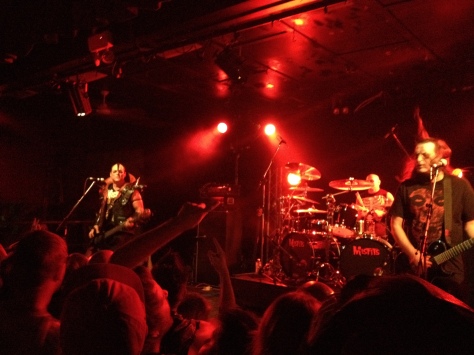 New Jersey horror-punk legends the Misfits may have had more line-up changes than Kiss, Thin Lizzy and The Ramones put together (possibly), but with founding bass player and vocalist Jerry Only still at the helm of the iconic band, they seem to be in just as good a shape as ever.

Brisbane’s The Zoo is packed and humid as a sell-out audience takes position to catch the make-up toting trio, with almost as many skulls on T-shirts as tattoos and chains hanging from a variety of facial features. First up is Sydney quintet The Wrath, who put in a strong opening set as the venue fills, followed by fellow Sydney-siders Graveyard Rockstars, whose performance is a mashing together of white horror-punk make-up, head-banging dreadlocks and foreboding tales about death and what might be lurking “six feet under the floor”. “This next song is a doomsday anthem,” says frontman Ash Rothschild. “You can take it how you will. That sounds a bit gay, doesn’t it?”

With a stripped-down stage show for their Australian jaunt, the Misfits themselves don’t take long before lowering the lights and appearing before an audience now collectively losing its marbles. Almost from the second Jerry, Dez and Eric take to the stage a mess of frenzied moshing breaks out front-and-centre, and the energy doesn’t let up for ninety minutes. Jerry Only is the focal point throughout; his trademark devilock hairstyle hasn’t changed a bit since 1977, and his spiked shoulders and skull-encrusted bass head reflect spotlights and drip sweat in tandem.

With Ramones-like speed the songs are reeled off, from ‘Land of the Dead’, ‘Scream’, ‘Attitude’, ‘Angel Fuck’ and ‘She’; the latter written when Only was seventeen, and seemingly about a hundred others. The inevitable crowd-surfing breaks out during ’20 Eyes’, and the band continue unperturbed as a sea of elbows, knees and beer bottles bubbles and boils beneath them.

Almost as quickly as it started the set is over, and I’m left with a feeling that despite the horror-punk label the band is given, there is so much more in their arsenal; from punk, speed-metal, rockabilly, and good old fashioned rock ‘n’ roll. They just don’t make ’em like this any more.