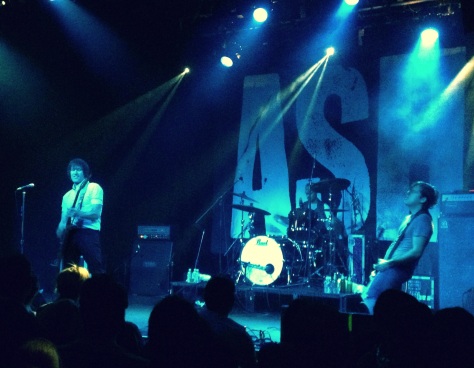 “Like the baby Jesus, Ash were born in a lonely stable. The sleepy Northern Irish village of Downpatrick is about as far away from the throbbing heart of the rock ‘n’ roll jungle as it gets. But like all such places, it’s packed with countless kids intent on escaping. And with Ash, it started the way it always starts – with two guitars, a drum kit, seemingly boundless energy and invincible optimism. ”

So says Ewan McGregor’s voice-over at the start of the Ash documentary Teenage Wasteland, as a trio of spotty-faced teenage wannabes thrash around in a series of fuzzy video clips from around 1992. It’s been a long twenty-one years since those heady days of busting a three-chord groove at Downpatrick Civic Centre, but while their music may have changed, the memories of those glorious mid-nineties days haven’t. Ladies and gentlemen, please get comfortable while this review gets a touch nostalgic.

Tonight’s show begins with a suitably exuberant set from Sydney band Charlie Horse, followed by proud Fortitude Valley rockers Blonde on Blonde, whose frontman coaxes the growing crowd to the front of the floor by promising that if we all “come forward, I’m not gonna touch you. Okay – I’ll probably touch you.” The quartet are probably too talented and stylish to be covering the likes of Oasis‘s ‘Hindu Times’, and while they do it well, their final track – new number ‘Weekend Behaviour’ – is much, much better.

Now: Ash. Being forced into this world in the same Downpatrick hospital ward that spewed forth the probably-delightful bundles of humanity that eventually became the indie-punk-pop heroes, in some roundabout way makes me feel like I understand them. For the three inarticulate Northern Irish schoolboys, making music was all about escape. They’ve taken the limited abilities that they were given at the time, started running, and never looked back, while managing to save Irish pop music from the shiver-inducing hideousness of the fucking Cranberries while they were at it. Most of what they’ve achieved was the result of a work-rate that would kill off many a lesser band, and singer-guitarist Tim Wheeler’s ability to write punk-pop songs that spoke to us like a fibre-optic cable hard-wired directly into the deepest recesses of our very souls. It’s pretty powerful stuff.

Tonight, the band take to a Hi-Fi stage awash in blue light, and launch into opener ‘Lose Control’; the three-piece immediately sounding tight, powerful, and incomparable all at once. Tim Wheeler has essentially always been a poser; the Flying-V in his (still surprisingly youthful for a man pushing 40’s) hands is evidence of that, and Mark Hamilton – while having put on a few pounds since 1977 was released in 1996) has lost none of the energy that has always made him so fun to watch on stage. The bassist’s ability – in the band’s early days – to perform while horrendously wasted was always worthy of admiration, in this writer’s opinion, and drummer Rick McMurray is just Rick McMurray – hammering away at the skins without so much as changing facial expressions all night, or probably all his life.

1977 spawned no less than four singles, and the next two tracks, ‘Goldfinger’ and ‘Girl From Mars’ are two of them. Watching the band perform such classic tracks makes for a strange, wonderful, and somewhat distressing feeling; when you realise that these songs don’t belong to you solely, and that there are hundreds and possibly many thousands of people to whom they are every bit as sacred; when the lyrics are so intertwined with memories of your own adolescence that it’s hard to tell them apart and it feels like someone is dictating your very thoughts on a public platform. After ‘Goldfinger’, Hamilton stands on the monitor, stares down the audience with a look of extreme distaste, grits his teeth and mouths “COME ON” like his life depends on it. Like I said – powerful stuff.

The crushing and often overlooked ‘I’d Give You Anything’ and softer ‘Gone The Dream’ precede the first ape-shit moment as ‘Kung Fu’ has the audience losing their collective marbles. “Kung Fu/Do what you do to me/I haven’t been the same since my teenage lobotomy,” sings Wheeler with as much energy as he did way back when, and the crowd give it back in nostalgia-tinted spades. A blues-y interlude and a bit of a crowd sing-along is a nice touch, before the final single ‘Oh Yeah’ and it’s devastatingly close-to-the-bone story of bitter-sweet teenage love.

Once 1977 is done and dusted the band have free reign, and brilliantly delve even further into their catalogue with ‘Jack Names The Planets’ from 1994 mini-album Trailer. Jumping back to the post-1977 era, they continue with ‘A Life Less Ordinary’, and despite a stoppage to allow a bone-headed security guard to get his meaty paws on a crowd-surfer and Wheeler’s exclamations of “We’re trying to have some fucking fun,” the shows continues with an encore including ‘Shining Light’ and ‘Burn Baby Burn’ in a strong finish.

You can say they’re just a pop band. You can say there are better bands out there. You can call it nostalgia or nineties-revival. But the simple fact is this: Ash playing 1977 is a bloody beautiful thing. Powerful stuff.