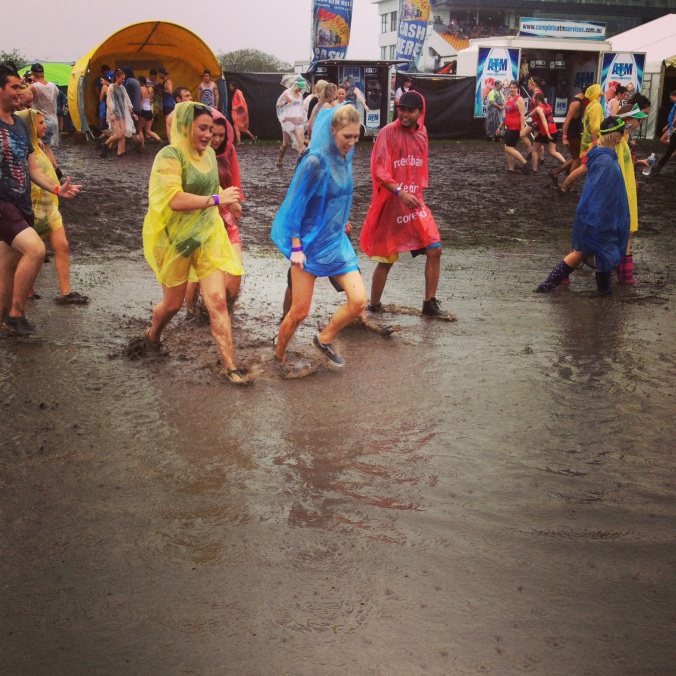 Anybody reading this will probably know by now that the Brisbane leg of Future Music Festival 2013 descended into something close to the seventh level of satanic mud hell; a washout of such magnitude that at one stage I caught myself looking at a discarded soggy pizza box and considering it a good vantage point. It’s tempting to launch into a rant about festival organisation/contingency plans/lack of shelter blah blah etc., but given a few hours to reflect since fighting off borderline hypothermia and trench foot, I realise that the day’s rain, mud, and general quagmire-related grimness are the things that are going to make Future 2013 so memorable. To my fellow festival-goers who made it through the day and came out smiling – I salute you!

I arrived at Doomben Racecourse just before 1pm, and headed to the Mariachi stage on the far side of the compound. At this point there was plenty of water on the ground and rain still falling in torrents, but no hint of the sludge-fest it would soon become. Gypsy & the Cat were just kicking off, sounding like a sight for sore ears with the always excellent ‘Bloom’ appearing early in the set to lift spirits and brighten hearts. The band’s music is perfect for a summer festival; all sunny melodies and harmonies, and it still sounded so through the deluge. ‘The Piper’s Song’ and ‘Only in December’ followed, before ‘Jona Vark’ provided a late set highlight, as singer Xavier Bacash invited the audience to sing along, which they did in spades.

Okay, I don’t want this review to turn into a weather report, but it’s safe to say that at this early stage I was soaked to my balls, as was every other person present, I’m guessing. Ellie Goulding – next up at the Mariachi stage – acknowledged the shitty situation with “thank you so much for coming to see me guys, I know how bad it is out there,” between showcasing her powerful voice (forgive me for not writing the playlist down – my notepad turned to mush and my phone was wrapped in a plastic sandwich bag) and covering several kilometres around the stage. Another fine set to lift spirits.

There are only so many times you can listen to “Brisbane: make some noizzzeeee!” or “Brisbane: put your hands up in the aaaaiiiiirrrrr!”, so Rita Ora’s crap-pop quickly became tiresome. Party and bullshit? Well – you’re half right Rita.

So, after a quick trip to the bar for the soothing nectar, it was back to the Mariachi stage to catch New York indie-rockers Fun.. Satisfyingly, they began with single ‘Some Nights’ and the energy level of frontman Nate Ruess didn’t let up from there, as the crowd bounced in unison to their quirky pop tunes. Any band that can make lyrics like “Well some nights I wish that all this could end, cause I could use some friends for a change” sound so damn cheerful and catchy are okay by me.

Azealia Banks has courted plenty of controversy recently with her alleged homophobic remarks, but it has to be said: the girl has a voice. She had gathered the biggest crowd of the day so far to her set; her voice booming across the racecourse with the easy confidence of someone who had been doing it for decades, not the young lady that she is.

One name that stood out to everybody when looking at their timetables was South Korean sensation Psy. His ‘Gangnam Style’ was one of the most talked about things of 2012, and I still can’t work out why. As I got a decent vantage point for his set I felt a small sting of shame that I was a tiny part of making this nonsensical tune more of a thing than it should be. Psy himself, is under no illusions, however. Addressing the audience before a note is played, he humbly pokes fun at his act by saying “You know me for one song only, but I’m contracted to do five, sorry,” before playing three songs (with excellent vocals on his part and a multitude of glamorous dancers), then announcing he will do ‘Gangnam Style’ twice to massive cheers and hectic dancing. I leave thinking that it’s all a bit of harmless fun and we’re all total suckers for finding something so silly even remotely entertaining. Well played, sir.

At this point I needed to get some circulation going again in my limbs, so I made the trek through the sea of deserted, muddy shoes and up to the grandstand to get some heat, food, and beer in my shivering body and send my editor a bitchy text along the lines of “Only the Stone Roses are worth this shit.”

After a deep, drunken, and borderline sexist discussion with some wasted Irish guys about the ins and outs of dating Australian women, I return to the other side of the waterlogged field once more, take in the end of A-Trak’s set, and settle in for The Temper Trap. It had taken over five and a half hours, but finally the musical heavyweights were here. Darkness had fallen, and a superb set by the London-via-Melbourne lads culminate with the ubiquitous ‘Sweet Disposition’ in the red spotlight and stage smoke glow provided the highlight of the day so far. Were they ever going to finish with any other song?

As for the highlight of the entire festival: this is the one. The Stone Roses. Now, I have to admit at this point that I’m a massive Stone Roses fanboy – from doing school exams when only ‘Waterfall’ could ease my nerves, to dancing like a monkey to the wig-out at the end of ‘I am the Resurrection’ as a drunken brat of a teenager, to breaking up with my first girlfriend and ‘She Bangs the Drums’ taking me to my happy place – like many others, the ‘Roses are practically sacred to me. Their songs have soundtracked my life, and when the unthinkable happened and they got back together, I shed a few tears of joy. At Future they played ‘I Wanna Be Adored’, ‘(Song For My) Sugar Spun Sister’, ‘Shoot You Down’, ‘Waterfall’, ‘Fool’s Gold’, ‘Made of Stone’, ‘This is the One’, ‘Love Spreads’, ‘She Bangs the Drums’, and an epic closing version of ‘I Am The Resurrection’. Ian Brown was on top form – his voice sounding much stronger than Friday night’s gig at the River Stage, and Reni and Mani proved why they are still one of the best rhythm sections around. Before I saw them, I was ready to be most impressed by the groovy stomp of Reni’s drumming, but it was the guitar work of John Squire that made me gasp the most. He is a true titan of the guitar; under his unassuming demeanour there is a monster shredder trying to get out, and I could have listened to him, and all of them, play all night. What a fucking occasion – the music world has missed them.

For me, nothing could have topped the ‘Roses, so I dragged my sorry, drowned-rat ass straight onto the train and made for home, and the safe, comforts like hot showers, dry underwear, and cold beers. Standing ankle-deep in freezing cold shit-water while being pelted sideways by a brutal watery onslaught from the heavens for eight hours (with nothing but a flimsy poncho for cover) in order to hear a few tunes is something to be proud of. To every single person who lasted the day, I say well done. Douchebags, one and all.