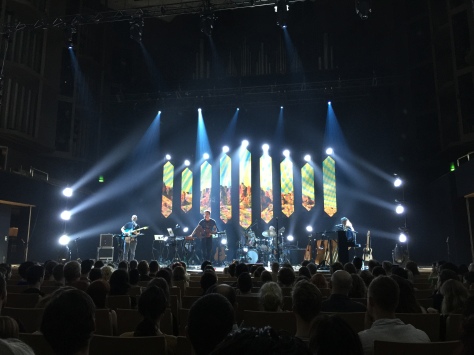 QPAC Concert Hall – seemingly as tall as it is long and with 1800 seats – is a bloody big venue and needs some big noises to make it feel full.

It’s clear within seconds that Sydney’s Ngaiire, supporting Sufjan Stevens on this tour, is a singer who is more than up to the task. Diminutive in size, but certainly not in vocal ability, the Papua New Guinea-born artist will surely have won many new fans with this over-too-soon 30-minute set. ‘Fall Into My Arms’ is an early highlight, while single ‘Once’ and ‘I Can’t Hear God Anymore’ are moments of unbridled joy. What a bright future she surely has.

The Sufjan Stevens Show in 2016 is essentially a two-part drama: an intense trip of 14 tracks from across the 40 year-old’s career with all the electronic trimmings, followed by a stripped-down, semi-encore of a further handful of songs that brings it all home with intimacy and charm.

The opening trio of ‘Redford (For Yia-Yia and Pappou)’, ‘Death With Dignity’ and ‘Should Have Known Better’ have the audience in raptures as a searingly-vivid light show evokes the feeling of being in a particularly garish (and particularly loud) church or cult meeting. The five-piece band go about their task with a near-telepathic sense of communication, as the mood of a piece can lift or drop depending on a look or the slightest gesture.

‘Drawn to the Blood’, ‘Eugene’, ‘Carrie & Lowell’ and ‘Blue Bucket of Gold’ from 2015’s all-conquering Carrie & Lowell make appearances before the band disappear and reappear after deafening calls for more.

Now, dressed in fairly ridiculous orange t-shirt and cargo pants, Stevens is more laidback and chats to the audience, including labelling his banjo a “strange instrument”. The closing section of the show is, in many ways, more rewarding for the gig-goer, as it provides a chance to see the musicians’ true skills at work in a stripped-down and more measured setting.

Songs including ‘The Dress Looks Nice on You’ and ‘John Wayne Gacy, Jr.’ are worked through, before obvious closer ‘Chicago’ sees Ngaiire return to the stage for a grand finish. 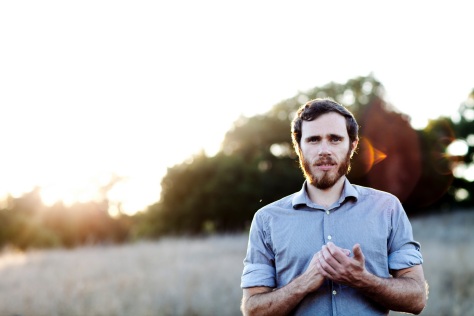 JAMES Vincent McMorrow’s music is tailor-made to fill big spaces, metaphorically and literally. Luckily for him – and us – an upcoming show at QPAC and two nights at the Sydney Opera House will allow it to do just that.

“I want [the show] to be something that’s not just song, gap, song, gap,” he says. “I want it to be something that flows and gets bigger as the set goes along. We’ve got this really expansive lighting rig that we’re bringing; it’s kind of the fifth person on-stage. Hopefully we’ll bring a booming big set.”

The 31 year-old Irishman is no stranger to Australia, having been here as recently as five months ago, but he admits the sudden demand for tickets caught him off guard, in a good way.

“I don’t really pay attention to what’s going on in particular countries unless I’m there,” he says. “We were [in Australia] in January and the reaction was brilliant. When we talked about doing these shows, the idea was to do them way later, then all of a sudden I was told things are really good here. About a week after they put them on sale, I got a call saying that the Sydney Opera House was sold out and they were adding second dates. It definitely took me by surprise in the most wonderful way possible. I mean, I’m pretty ambitious and I want to play places like that, but I didn’t expect it to happen this quickly in somewhere as far away as Australia. But then, you can’t predict everything; sometimes things just work. We just finished the US tour, and it was very much big venue to small venue to big venue, depending on which city we were in. I don’t feel any different if we go from 1600 people one night to 600 people the following; I still feel the same. Obviously Sydney Opera House is a special place; it’s like the Royal Albert Hall or Carnegie Hall or somewhere like that. There’s a resonance that goes beyond it being just another show, perhaps. I’ve looked at all the other Australian venues and they are all stunning and look amazing, so I won’t think about them any differently, and they’re all equally important.”

Released in January, Post Tropical is McMorrow’s second album, and sees his sound moving further away from his folk roots in a more soulful direction.

“This record was made for people to live with for a while,” he says. “I didn’t expect it to give itself away to people incredibly quickly. It’s been interesting going from territory to territory and seeing people’s reactions. The first record did very well in Europe, and when we played shows there we could see people starting to wrap their heads around the new sounds and new ideas. By the end of the shows we could really see people understanding it. When we went to the US, people were really into it intensely, and we could hear people singing every word. It was very soon for that for me; with the first record I spent two years working away before people really heard anything. The response to the new record was really quite compelling and drove me onwards to play the songs better and better every night. The response has been how I hoped. I never expect it; I just hope for it when I do these things.”

The first single is ‘Cavalier’, which McMorrow explains is the most accurate representation of what Post Tropical has to offer.

“I chose it because I thought it was the best song on the record, in the sense of letting people know what’s coming,” he says. “I wanted it to be a song that draws a line in the sand, or plants my flag in the ground or whatever you want to call it. It’s a definitive sound; there could have been songs that show where the last record was and where the next one is going, before we deliver something like ‘Cavalier’ further down the line, but I didn’t want to do that. I think people are smart, and I’m not in the business of trying to convince people; you either like it or you don’t, and that’s totally fine. With ‘Cavalier’, I thought people will hear it and either be in or be out. If they hear it and understand what I’m doing and what I’m going for, musically and stylistically, then they’ll like it. I don’t want to waste people’s time putting out songs that might be a little bit like something they might’ve heard before, then when they go to the record it’s different.”

WHAT DO YOU GET when you cross a renowned Brisbane singer-songwriter, a contemporary circus group and a slice of lesser-known Australian history?

The answer is ‘Love-Song-Circus’; a show featuring the voice and music of Katie Noonan, the acrobatics of Brisbane’s Circa and a new way of looking at sometimes uncomfortable aspects of our past.

“I was inspired by an exhibition called ‘Love Tokens’ at the National Museum,” Noonan says. “It’s a collection of coins which have beautiful messages on them; inscriptions that convicts would write for the family they were forced to leave behind. The romanticism of that imagery really captured my imagination and I decided I wanted to find out more about these people. As a woman and a mother, I wanted to find out about the stories of the women; stories which have been explored by precious few people. I started a long journey of research into these women’s lives and came up with a song cycle of sixteen pieces that formed the basis of this body of work called Fierce Hearts, which became ‘Love-Song-Circus’ in collaboration with Circa as an ode to these incredible women. It was very different and challenging, but also very rewarding.”

Originally, I wanted to try to find the love letters of the women; to explore their love, lust and longings, and put their words to music. Unfortunately literacy was a gift bestowed generally upon the wealthy and generally men, so many women – particularly convicts – were illiterate. That made me rethink everything. I read lots of books, PHD reports and prison records, then wrote a series of poems which became lyrics to the songs, from the point of view of the women. In doing that, I wanted to make sure everything was factually correct, and I went on trips to get a sense of the physical world they would have seen; places like Tasmania where the bulk of the women went, and around Sydney. A lot of these stories are quite sad, but many of the women overcame adversity and became very strong. They were the original boat people, but they were forced to come here. England and Ireland at the time had incredible poverty and desperation which led to women stealing the loaf of bread, which is the quintessential convict tale. Rather than getting a helping hand they were sent to a place that was so alien to them.”

Joining forces with circus group Circa brought a new aspect to the telling of the stories.

“When I think of modern examples of strong women, I often think of physical theatre and the circus,” Noonan says. “Obviously, contemporary dance and ballet portray the strength of women in a really different way, whereas in circus you have these incredibly strong women in a physical sense. I really admire Circa’s work; I think they take circus work to a different place than most; it’s certainly not from a cabaret or burlesque point of view in any way. The directors come at it from a theatre background and there’s a sense of narrative and drama, and they add a really interesting element to these stories. A lot of the themes are of sisterhood, solidarity and looking after each other, and they are reflected beautifully by the bodies of the women in Circa. It feels like a really lovely combination and has been a successful relationship.”

Performing ‘Love-Song-Circus’ at a series of hometown gigs is just the start of a busy year for Noonan.

“I’m doing lots of writing and working with the Tasmanian Symphony Orchestra,” she says. “I’m also writing my next record with my band The Captains, but these songs are my main focus as the album is coming out. We’re opening in Brisbane, then a week at Adelaide Fringe, then Sydney. I’d like to get it to Perth, but my big dream is to bring it to Tasmania, where most of these women were based. In fact, I’d love to do it at the Cascades Female Factory on the earth on which they worked.”