From busking outside train stations and having to pay to play in Tokyo’s live music venues to becoming a leading light for Asian music internationally, Japanese psych-rockers Kikagaku Moyo have come a long way since their 2012 conception.

Much of that success was down to early push and pull factors that saw them leave their homeland and discover new communities and audiences abroad, Kurasawa explains.

“When we started, people were beginning to care more about music outside of where they were,” he says. “At that time in Japan, media would see you as either a Japanese band or a foreign band; different things were expected from domestic and international bands. There was a tendency at the time for Asian bands to be like American bands; to sing in perfect English and those kind of pressures. But we’re not from L.A. and I like being different. Also, in Japan at that time, bands had to pay to play, whereas in Australia we found you could get paid, even if it was gas money or dinner money. So, we thought, ‘let’s go to Australia’. It gave us confidence quickly after our first show in Melbourne.”

Guruguru Brain – founded in 2014 – is a major focus for Kurasawa and Katsurada this year, as the label seeks to expand into new territories and make connections internationally; albeit with a focus grounded by a DIY approach and communal aesthetic.

“It’s nice to feel that we’re supporting the community,” Kurasawa says. “This is something I see in Australia because, geographically, it’s so hard to tour in America, so the community has to support each other. That’s kind of what we are trying to do for the Asian music community. This is a big mission for us; even more than the band. The band is nice; hanging out, playing music with friends and touring, but we’re also trying to focus on the label, so we’re meeting new bands from Taiwan and some others. I look for originality and identity in the music. It’s interesting that a garage band from Taiwan can be so original but you can hear influences from, say, New York or Chicago. You can connect over feelings that maybe we grew up listening to the same types of music.”

Kikagaku Moyo’s mind-bending sounds range from hard-rocking psych to mellow, sitar-drenched folk and much more in between, and every live experience is a very different beast, with about 20 to 30 per cent of the show being improvised. The band will tour New Zealand and Australia beginning 28 February, with a show at the Croxton Bandroom on 4 March.

“Every day we change the setlist and we have songs that can change and become improvs,” Kurasawa says. “We just kind of have to see what we feel, and it depends on how the song is affected by the atmosphere and the audience setting etc. This will be our third time touring Australia. The first time we came was in 2013 when we had just started the band, so it’s really nice to come back to where it all started in terms of touring. Last time we played Gizzfest, we connected with lots of audiences and other bands. It’s a very nostalgic and special place for us. I think we are going to stay in Japan after this Australian tour to do some writing. We will record this year and hopefully [a new record] will be finished this year. Since we are self-releasing we can do it any time we want. There is no pressure.”

“It is not the strongest or the most intelligent who survive, but the ones most responsive to change” is a misquote often attributed to Charles Darwin, and it’s an idea vocalist and songwriter Kevin Parker seems acutely attuned to on Tame Impala’s contender-for-album-of-the-year third LP. Psych-rock has been the name of the game up to now, but would you expect such an accomplished band to trundle out the same smack as before? “They say people never change, but that’s bullshit,” Parker sings defiantly on ‘Yes, I’m Changing’, as guitars make way to more electronic (read: dance and pop) elements than on any TI release thus far, with notable exceptions ‘Eventually’ and the goofy disco-funk of ‘The Less I Know the Better’. His love of ‘90s Michael Jackson shows in ‘Love Paranoia’, while ‘Gossip’ recalls 1998-era Air and ‘Past Life’ gets deep into dreampop territory. There’s no big rock number in the vein of ‘Desire Be Desire Go’ or ‘Elephant’, but the addition of one doesn’t feel like it would be a good idea. In fact, this is the most coherent Tame Impala release yet. These are the times, people: some of the best Australian music is being made right here, right now. Well, in Fremantle, to be precise. Currents is the sound of Parker dropping his guard and embracing everything he loves about great pop music. BLUE MOUNTAINS psychedelic/pop quintet Richard In Your Mind have returned with Ponderosa, their most accomplished album to date.

Band leader Richard Cartwright explains how it came together and why marching to the beat of your own drum is a good thing, ahead of their Sydney shows.

“People seem to get it,” he says. I think it’s kind of a weird album I guess, although that’s for other people to decide. There are songs on there that stick out like a sore thumb, but we decided we’d keep them on there anyway because that’s what we like and what we wanted to do, and it seems that other people are like ‘it’s great that you did that’ instead of ‘you really messed up the whole thing by doing that’. So, we’ve been pleasantly surprised that people get it, and that’s cool.”

“There’s one called ‘Good Morning’ and even a little of ‘My Volcano’; they’re kind of synthy and groovy,” Cartwright says. “’Good Morning’ especially has a pitch-shifted and distorted vocal. It’s kind of noisy. We wrote heaps more songs than we put on the album. We basically kind of just chose the best. In making the list, we played around a lot before deciding. There are still heaps of songs we really like that didn’t make it on, but we tried to balance the instrumental tracks in between the songy-songs to make sure people weren’t getting too lost in an instrumental before giving them another kind of stronger-feeling anchored to a proper song. In the long run, there’s an argument for not having too much coherence. I feel like there’s always more work to be done leading up to releasing it, but we’ve had it ready for a little while now, and now it’s not just in our heads, it’s in the world. We wanted to make sure we got it right. It took as long as it did, and once it was finished it was decided we were putting it out in five months, which seemed like ages, but time is on a slope and it goes fast and here we are now. It feels good.”

The singer explains how the off-kilter album found its title after a discussion about the Cartwright family on the American TV Western Bonanza.

“Well, I’m a Cartwright,” he says. “Not that I really grew up watching a lot of Bonanza, but my parents and people in the generation above did grow up with it would talk about Bonanza and start singing the tune to me. It was only recently when my mother came to visit and we were talking about Bonanza that she mentioned that the ranch was called Ponderosa out of the blue, and I thought it was a kick-arse name for something. The whole album is a diverse album; it goes to different places, but in a way this idea of home and trying to describe the different things that stand for a unified whole or the quest for home or something; it’s not specific but it’s a vibe.”

While the influences and variety of sounds on Ponderosa are as eclectic as they come, single ‘Hammered’ is a frolicking ray of sunny pop that pays tribute to daytime indulgence, although Cartwright admits it’s not necessarily about alcohol.

“It depends on what you’re getting hammered on, really,” he says. “With booze you should wait a little bit, until you’ve done something, but if you’ve got the day off, the sun is shining and you want to have a spliff in the morning, you can.”

When he’s not getting loaded in the daytime, Cartwright can probably be found collecting ingredients for dinner, as described on ‘Four Leaf Clover Salad’. But how many four leaf clovers constitute a salad?

“I think it’s the same rule as ‘a few’, so three,” he laughs. “Two is only a couple of four leaf clovers, so obviously you’ll want more, so I’d say three is enough for a little salad. My wife is really good at finding four leaf clovers – she finds them constantly, and the way you get luck is by eating them, or so she tells me. I was walking the dog one day and that concept occurred to me, as I think I did eat a few.”

Expect upcoming Richard In Your Mind shows along the east coast to be heavy with new material.

“To start with, it’s a small eastern tour; Melbourne, Canberra, Sydney, Newcastle, Byron Bay, Brisbane and stuff. Then, hopefully we’ll play a bunch more shows. We’ve played a couple of shows, mainly focussing on the new songs. We want to make sure a couple of the new songs are more up-to-scratch, but at the moment our set is probably 50 percent new stuff. We’ll try to get it up to about 75 percent new stuff, while keeping songs we’ve always enjoyed playing live as well.”

RICHARD IN YOUR MIND PLAY THE LANDSDOWNE FRIDAY OCTOBER 17 AND NEWTOWN FESTIVAL SUNDAY NOVEMBER 9. PONDEROSA IS OUT NOW. 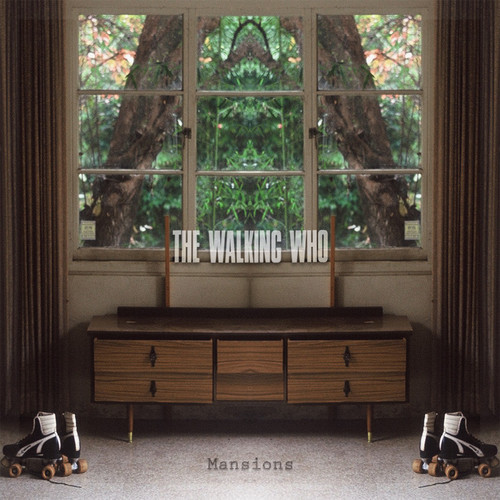 Sydney-via-Wollongong trio The Walking Who don’t seem like the type of band to stick to traditional methods. Take making a record, for example – the house for which the EP is named (and in which it was recorded) is a now-demolished old dwelling previously occupied by an eccentric theatre owner who died in the master bedroom, and in recent years became somewhat infamous locally for the strange and supposedly spooky goings-on there. Clearly the band weren’t put off, as this second release – after their 2011 debut Candy Flu – is a cool mix of psychedelic space jams, summer-y rock wig-outs, and indie-fuelled guitar fuzz along similar lines to parts of Pink Floyd’s career and compatriots Tame Impala’s last record. You can almost smell the incense and rollies in the air as the tracks go by, starting with opener ‘Rita’; a cool, calm, but not altogether collected track that ambles along at a casual pace. The heavy use of swirling organ and twangy guitars coupled with Rohin Brown’s deep vocals make single ‘Have You Seen The Colours?’ the most psych-rock track here, while ‘Pollen Of The Hour’ has a mystical vibe to begin with before breaking into shoegaze territory. Angus Stone makes a cameo on jointly-penned final track ‘Dead Man’s Alter’, and brings a dose of his folk sound to proceedings, complete with ominous undertones and brooding lyrics. They haven’t reinvented the wheel and it’s hard to pin-point exactly what it is they’re trying to do here, but The Walking Who have definitely got something good going on. (Independent)