‘Hey Hey It’s Another Public Holiday’ isn’t just a television program dreamed up during the writing of this review, but the perfect excuse to get out and see some great live music on Anzac Day Eve (24th April). 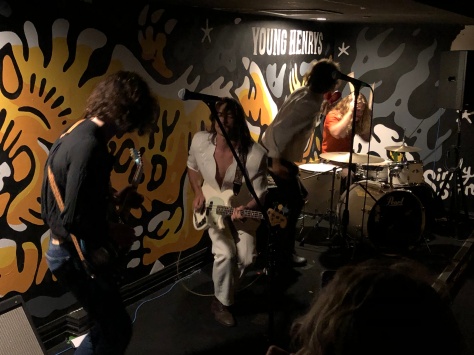 Deep in the belly of Fortitude Valley’s Greaser Bar is as good a place as any to indulge, and a suitably safe space to let loose with some old-school rock ‘n’ roll, albeit spewed forth by Auckland newcomers Mini Simmons; this being their debut Australian show.

But wait a minute.

The quartet’s look and sound are so firmly steeped in ’60s and ’70s classic rock that, on paper, there’s a risk of it all getting a bit Greta van Fleet, if ya know what I mean. That unthinkable scenario never happens, thank Hendrix, and the resulting triumphant show can surely only be the start of a long love affair between Mini Simmons and Australian rock audiences.

First up is Brisbane ramshackle racket-makers The Stilts, who include a shabby cover of ‘Home Among the Gum Trees’ in their fun set, and get a growing crowd pumped for the headliners.

From the second they hit the stage, the members of Mini Simmons are one hundred percent into their performance. Physically, it’s all hips, hair and handclaps; frontman Zak Hawkins is part-Jagger, part-Jim Morrison, part-awkwardly-flailing-stick-insect, while guitarist Brad Craig and bassist Jesse Hawkins are all zip and style, and drummer Yoni Yahel proves to be a powerhouse behind the kit.

By the band’s melodic and instantly-catchy third single, ‘A Way With Murder’, also the third song in tonight’s set, the audience is sold on everything the band is selling. Fifth number ‘Kids off Broadway’ is another highlight, as the band boogie and shake through tracks from their debut album, set for release next month.

For those who can’t get no satisfaction from the original material, they’ve got an ace up their sleeve with a version of the Stones’ ‘Midnight Rambler’, done in the Get Yer Ya-Ya’s Out style, complete with extended breakdown and all the necessary groove and filth. “I want to go down on… YOU!” spits Hawkins, to whoops from somewhere in the throng.

As the light and sound fade, the lingering feeling is that these four fellas deserve a bigger stage on which to show off their chops. Let’s hope they get it.