Three years. That’s how long The Preatures toured around their hit single ‘Is This How You Feel?’ and the subsequent album, Blue Planet Eyes. When the band finally returned home early last year, they were completely exhausted. 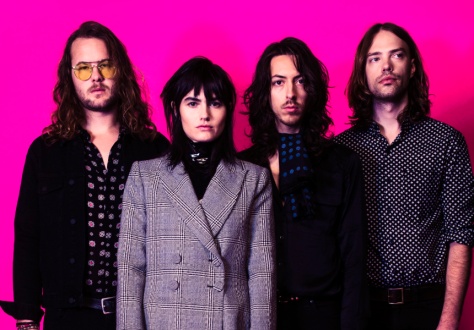 “Stepping out of the slipstream of that whole touring life was really welcome,” guitarist, co-songwriter and producer Jack Moffitt says. “In a good sense, we had reached the peak of what we were probably capable of achieving during all the time we spent together.”

But getting back to Sydney was also about The Preatures getting back to their roots. They holed up in their inner-city Sydney Hibernian House recording studio and set about writing material for a new album. The result is Girlhood, released last month. It’s an intensely personal collection of songs.
Moffitt says after the roller-coaster ride of a seemingly never-ending touring cycle, getting back to basics simply felt “right”. But the extent to which the band would incorporate their hometown into their music would eventually break new ground for them, and at the same time help introduce a new audience to an Indigenous language.

“We recorded it [at Hibernian House] because we have roots in that place; roots that have a lot to do with us growing up as a unit,” Moffitt says. “We didn’t see ourselves making this record in any other way. Sometimes you just know these things, so we made that choice.”

Forming in 2011 as a country-rock-soul quintet (the now-departed Gideon Bensen was the fifth member), The Preatures steadily built a large and loyal Australian following before taking a more mainstream pop approach with ‘Is This How You Feel?’ in 2013. Blue Planet Eyes was released the following year.

The single, the album and the subsequent time on the road turned The Preatures into proper internationalists with fans all across the world, but Moffitt reckons there will always be something intrinsically “Sydney” about the band.

“Everything has something innate that you can’t escape, and when you start writing, you’re pulling on threads of things that you don’t know how to explain,” he says. “Having made the last record in another part of the world [Austin, Texas], even though it was really hospitable to us and felt good, it wasn’t our place. We wanted the opportunity to really explore what it would be like to be here and work on a record.”

“It was a real catharsis to put a lot of energy into exploring that. Now that I reflect upon it, I can hear everything I’ve grown up with in this city on this record.”

It was during this writing process that singer and co-songwriter Isabella Manfredi attended a production of The Secret River by Sydney Theatre Company. Based on a novel by Kate Grenville, it tells the story of first contact between European setters and the local Dharug people, who lived scattered around what is now much of modern Sydney. Inspired by the play and armed with a desire to include Indigenous language in a song, Manfredi and the band wrote the single Yanada.

“It really moved her to hear that language,” Moffitt says. “I think it stirred in her a longing to find a connection to this place after so many years spent abroad, speaking or learning Italian and German. Then, coming home and hearing that language … she wanted to use [that] when we started writing for the album.

“When we were writing Yanada, [Manfredi] gradually set out to speak with and learn from the Indigenous community about the language. She came across [Aboriginal elder, musician and educator] Jacinta Tobin, which was such a special thing. To have the song acknowledged by Jacinta and all the people we’ve encountered through that process was such an amazing education. It started our relationship with this great heritage we all share.”

Working out how to include Dharug in a pop song respectfully and appropriately took time, Moffitt says.

“It was a real experience to … be guided by members of the community like Jacinta Tobin and [actor and Indigenous campaigner] Richard Green. Everybody was so generous and supportive of what Izzi was trying to pull out of this song with respect to language. It was an eye-opening experience, and has had a profound impact on my life.”

Intertwining the Dharug and English languages in a modern-day track not only connected the band to their area’s history, but to a branch of Australian music stretching back to Yothu Yindi and Warumpi Band.

“Neil Murray from Warumpi Band worked and spent a lot of time in communities in the Northern Territory, and wrote My Island Home,” Moffit says. “We’ve grown up with that as an echo in our consciousness from what was around in popular music when we were kids. It seemed to disappear for a long time, but maybe it was because our awareness of it was only there because of our exposure to it in popular music.”

The Preatures have an enormous presence in Australian music and Moffitt recognises the potential for the band to start a conversation about shared history and language.

“Even if the discussion turns to the definition of “yanada”, which in Dharug means ‘moon’, you’ve got two terms that could be the start of someone’s path into learning about their communities,” he says. “For me, I’m not even qualified to really pass any comment on it other than what my experience is, which is that I feel like I’m at the start of a lifelong journey.”

A new album of course means another round of touring. There have already been performances at the Enmore Theatre in Sydney and the Forum in Melbourne. Next up is a performance at the Spiegeltent for Brisbane Festival, followed by shows in Adelaide, Perth and a clutch of regional dates. Moffitt reckons they’re ready.

“We’re at that point where we’re looking forward to being back in that vacuum,” he says. “That mode of touring.”

Girlhood is out now on Mercury Records.