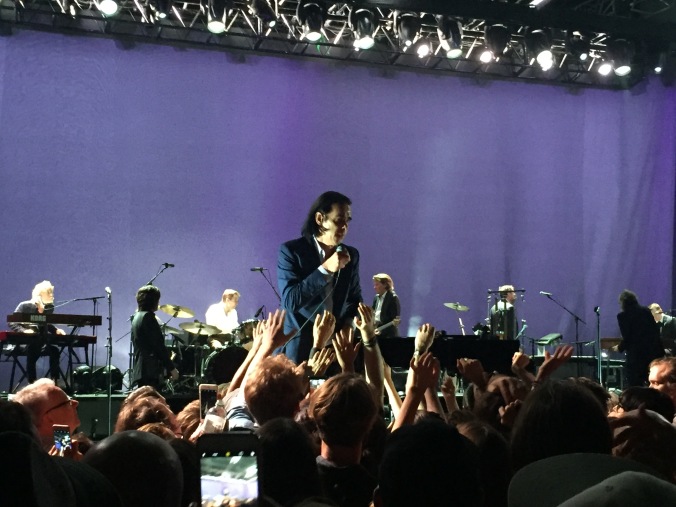 “It’s always so f**king hot in Brisbane,” says Nick Cave, four songs into the set. “How do you even tolerate it?”

The answer to that question probably includes tonight’s audience being willing to endure the heat and a whole lot more for the chance to spend the night before a public holiday in the company of one of Australia’s finest artists (somehow the words ‘musician’, ‘singer’ or ‘songwriter’ fall pathetically short when applied to Cave).

It may be hot, hot, hot at Brisbane’s Riverstage, but such trivialities melt into the background when faced with the all-conquering qualities of Nick Cave and the Bad Seeds; whose latest album ‘Skeleton Tree’ is getting its first airing in these parts. For that reason, themes of loss and death are particularly heavy in the set, but nothing exists in a single dimension with Cave. Despite the darkness, frustration, and anger in much of his music, the show is a remarkably humorous affair. Cave urges the audience to write to the City Council over the “fucking absurd” 10pm curfew, playfully shouts “Sexual harassment!” when a female audience member gets a bit too hands-on, makes a subtle dig at that Trump guy, and gloriously messes up his vocal timing at a couple of points: all adding to the enjoyment of the spectacle. 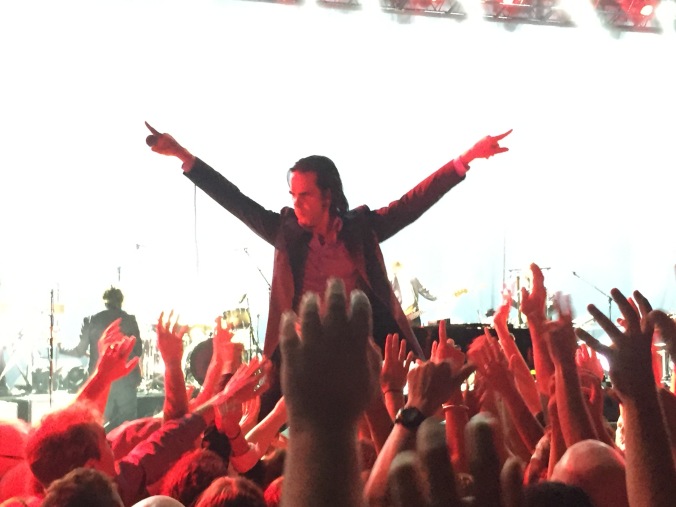 An opening trio of ‘Anthrocene’, ‘Jesus Alone’ and ‘Magneto’ confirm it is going to be a special night, before a slithering and emphatic ‘Higgs Boson Blues’ provides an early highlight, followed by the towering ‘From Her to Eternity’. Cave dominates the stage as he slides left and right, arms gesticulating wildly and face contorted with intensity. At almost 60 he is still as magnetic and charismatic a frontman as you are likely to encounter, adding to the near-ritualistic nature of the show.

‘Tupelo’, ‘Jubilee Street’, ‘The Ship Song’ and ‘Into My Arms’ are up next, with Cave describing the latter as the best version they have done in 15 years, and, with a cheeky smirk, asks the audience to “leave it to the professionals” when song requests are hollered. ‘Red Right Hand’ brings perhaps the biggest highlight of the second half of the show, and sees Cave once again getting among his worshippers at front-and-centre.

‘Skeleton Tree’ is the obvious closer, and with one eye on a clock showing 9:50pm, the band reappear quickly to run through ‘Mermaids’ and an apocalyptic ‘Stagger Lee’. There’s a lingering question over whether the “fucking absurd” curfew has robbed us of at least one or two more tracks, but if the feeling in the chests of several thousand people leaving the Riverstage isn’t 100% gig-going satisfaction, I don’t know what is.