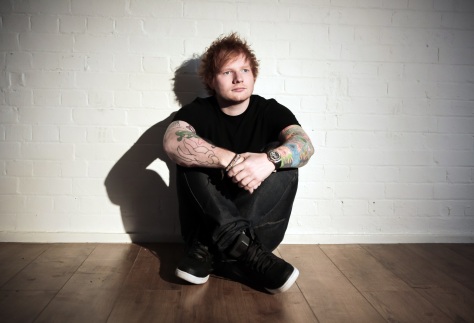 IT’S 6:30pm in Brisbane and something big is happening. Traffic is gridlocked across the CBD, there’s a queue at every ATM and a childlike optimism fills the streets; something definitely isn’t right.

As a giggling swarm of teenage girls descends upon Brisbane’s River Stage, absorbing a seemingly endless supply of hot chips and Dagwood dogs, Ed Sheeran fever takes hold, and it’s not yet clear whether tonight’s gig – the first of three in Brisbane – will be a triumph or a tragedy.

Brisbane boy Conrad Sewell is first to feel the force of the girly screams; the young singer and his pianist run through a short set of sickly sweet pop songs including singles ‘Hold Me Up’ and ‘Start Again’, which sound fine, but could do without introductions like “this next song is about the world” or “this is for all the ladies in the building”.

Second support is Sheeran’s countryman Jamie Lawson, who is the most timid and melancholy performer on show tonight, although his guitar work is fairly classy. He loses the majority of the audience for the first half of his set, before reeling them back in by requesting the wall of baying girls at front-and-centre “be his horn section” (the jokes practically write themselves) on ‘Ahead of Myself’ and latest single ‘Wasn’t Expecting That’, which includes the classic lines “You spent the night in my bed/You woke up and said/‘I wasn’t expecting that’”. Don’t worry mate; it’s happened to us all.

By now, the 9500-capacity venue is full to bursting and the screams welcoming Ed Sheeran to the stage are approaching ultrasonic. Bouncing around with his flaming locks flapping in the breeze, the 24 year-old announces “My name is Ed and my job for the next two hours is to entertain you. It’s your job to be entertained,” as he starts with ‘I’m A Mess’ and ‘Lego House’, with only an acoustic guitar and loop pedal in tow. It only takes the Englishman to stand on his monitor and put his arms in the air to unleash another wave of screaming that threatens to shatter windows within a kilometre’s radius as he moves through ‘Don’t’ and ‘Drunk’, which by now I seriously wish I was.

“I came down with a bad case of man flu this morning. I’ll lose my voice by the end of the show; I hope you do too,” he says, before yet another request to sing along in what, by now, is becoming part of an obvious formula for pretty much every song: (1) request singing, (2) strum a few jaunty chords, (3) throw in some “ooh, oohhs”, (4) break into a sort of pseudo-rap vocal nonsense for two to three minutes, and (5) stand on the monitor if the response isn’t satisfactory.

After the first few songs the formula gets very tired very quickly, and while Sheeran undoubtedly has talent and puts everything into his live performance, it’s hard to see how anyone except naïve kids and their bored middle class parents could be taken in by what plays out as essentially a glorified busking set. In saying that, there’s major money to be pulled from the willing hands of those demographics, as tonight’s gig shows; quality of musical output be damned.