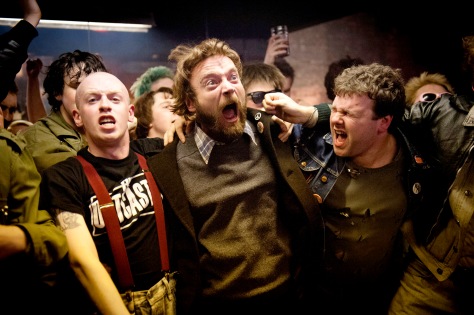 TORN apart by the violent sectarian divide known as The Troubles, Belfast in the 1970s was the last place you would have expected to see a musical revolution.

Enter Terri Hooley: founder of the Good Vibrations record store and label, which helped kick-start the bomb-ravaged city’s punk scene. The film of the same name tells the story of Hooley’s life and the bands his determination inspired, as directors Lisa Barros D’Sa and Glenn Leyburn explain.

“We became involved in the film while there was just a brief outline written by Glenn [Patterson] and Colin [Carberry], the writers,” says D’Sa. “They had originally come up with the idea. We knew a bit about Terri Hooley through the music scene he was involved in, and we knew of him as an extraordinary man who had lived through extraordinary times. I think what really appealed to us about the story when we came across it, was that we realised that this was just not a story about a local legend, but a really universal story about someone who was a light in the darkness during the worst of times for a lot of people. It was a story about music and youth in general; just that spirit of youth that won’t be downtrodden. This was a time when young people wanted to be going out, meeting people and working out they were, but it wasn’t safe for them be to be out, meeting their friends in town and doing those kinds of things. It’s a story about that compulsion, that determination to go out and live your life, despite whatever dark forces are closing down the city you live in. That was something we felt that audiences all over the world might respond to. We also knew it was an opportunity to tell something that was celebratory with that distinctive dark comedy wit that is born of this place. I think we found that we had the opportunity to show all of that in the story and to create something of a celebratory spirit that was perhaps going to be a new way of looking at it.”

The Northern Irish conflict is not widely known about or understood internationally, but ‘Good Vibrations’ is a story with universal themes, says Leyburn.

“I think there were a lot of things about this story that we hoped would have a universal resonance,” he says. “Especially in the times we live in today. There’s conflict all over the world, and there are kids and teenagers facing the same challenges as those in Belfast at that time. Our story is a positive one; one that we hope has been told with humour. There have been films about The Troubles in Northern Ireland that tend to focus on soldiers or prisoners or whatever. That is the story we’re telling; it’s just about a different thing. It’s about that spirit of resistance and people who refuse to be defined by the dark forces around them. We’ve been lucky enough to travel around the world to film festivals. It’s been played in South Korea, the Czech Republic and the list goes on. A lot of those audiences have connected with it, and there’s a resonance to their own recent histories.”

At 65 and retired, Hooley no longer owns the store, but was an active influence in the making of the film.

“To tell the story, Terri had to be on board,” Leyburn says. “The fact that he was able to get to know us was important to him and to us. I knew of Terri and his legend; I’d seen him around Belfast and bought records from him, but I didn’t really get to know him. Through the process of developing the script and the film I got to know him really well. Terri has a very unique way at looking at the world. He’s a unique story-teller, and tells stories that are very vivid and interesting. I think for us to get to know him as well as we did helped us to bring a bit of his verve for life and telling stories to the screen. Also, just for the spirit of the thing; he came to the set and there was always an open door for him. You can’t make a story about somebody who’s still around and shut them out; I think that’d be the wrong way to approach it.”

While the story is one of inspiration and punk rock, the directors were keen to paint Hooley in as realistic a light as possible.

“He’s obviously a flawed human being, as we all are,” says D’Sa. “He’s a very generous person, and that comes across in the film, and once he was happy for us to make the film, he was particularly generous about it. He trusted us to go and make the film. It’s not going to connect with everyone if you make someone appear like a saint, and we had to tell the story to be true to what we were trying to say. The first screening we had when we finished the film was for Terri himself. We sort of hoped it would be just for Terri and his close friends and family. We wanted him to see what was a potentially difficult portrait of himself in a way, and we wanted to give him a chance to see it without anyone there. Typically for Terri, he wasn’t worried. He did bring a group of close friends, but for Terri that tends to mean about 200 people. We watched it in a room full of people who had been there at the time, and of course we were worried about what his reaction was going to be, but at the end Terri was in tears and made a lovely speech; he was very gracious and said how much he had been moved by the film. He has travelled with us a lot, and come to screenings all over the world. I think it’s just typical of the person that he is that he’s felt good about supporting it and sharing his story with the world.”

Game of Thrones actor Richard Dormer plays the title role, and was an easy pick for the job, says D’Sa.

“From the very first stages of developing this film, we knew Richard was the actor we wanted to cast,” she says. “Not only is he a phenomenal, subtle actor, we knew he was going to be brilliant at inhabiting the role and soul of this character. He also understands the DNA of the place and the time. We did a pilot, and Richard kindly agreed to come and play the role in a few early scenes. That was job done; once we had screened the pilot to the financiers, any of their concerns seemed to wash away at that time, because they could see what they believed, and that was that he was going to do an incredible job. It’s a very dynamic, charismatic performance, but one which also allows you access to the vulnerability to of that character. We’re really glad he’s been cast in things like Game of Thrones and big movie parts, and it’s incredibly well deserved.”

The story culminates with a huge punk gig, organised by Hooley to pay off the label’s debts. Luckily, the directors were able to call on another Belfast band to help out.

“We had a lot of support from Snow Patrol, who are executive producers and financiers of the film,” D’Sa says. “It was really down to them that we were able to get 2000 extras. On our budget we couldn’t afford to do that, but the Snow Patrol guys put out a call on their fan site asking people to show up at the Ulster Hall in Belfast, dressed in appropriate punk clothing for a couple of hours filming. Of course, within an hour, we had our 2000 extras for the scene, and the treat for them at the end was that the guys would play a two-hour acoustic gig after filming. So, we all these extras in punk clothing, the entire cast and crew was there, and it was a really joyous experience that felt like it channelled a bit of the original spirit of that gig.”

GOOD VIBRATIONS IS IN CINEMAS JUNE 12.