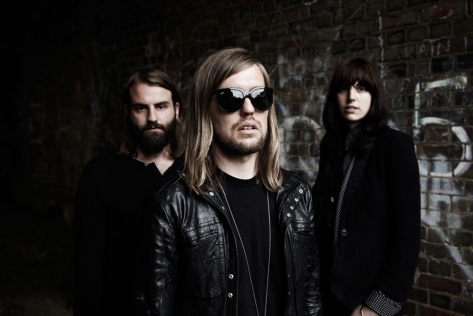 ENGLISH alt-rockers Band of Skulls are probably one of the hardest working bands in the business.

Since their 2009 debut Baby Darling Doll Face Honey, the trio of Russell Marsden, Emma Richardson and Matt Hayward have consistently won fans the old-fashioned way; by touring relentlessly and improving with each album. Singer-guitarist Marsden explains how their hard work is paying off with new record Himalayan.

“It’s an exciting time,” he says. “It’s a tipping point now. The fact now that we have three albums to choose from really makes a difference. Only having one record makes playing a show for more than forty minutes quite a challenge, so now that we have all these records to choose from makes our shows much stronger. We’ve had the record finished for a while and it’s kind of a relief to be able to share it with people. I think that’s probably the emotion that’s going through our minds right now. We’ve been playing the songs live, so we’ve got a little bit of a feeling about how people feel about the new songs, but now people can get the record, take it home and live with it, then come see us play. When we’ll be down in Australia, that will definitely be the case, so that’ll be exciting.”

The band’s second album, Sweet Sour, was released in 2012 and saw their songs evolve with a cleaner, harder sound. This time around, they weren’t willing to sit still either.

“We changed producers for this record,” Marsden says. “That was kind of a big shift. Nick Launay came in to do this one, and we made it in London, so this was the first time we didn’t record in the middle of nowhere. We went into the studio every day and worked on the songs, instead of being stuck somewhere on a farm. It really changed the dynamic of the recording session, and I think that comes out in the music; it was fun to do it every day and we really relished the challenge. Previously it was more intense, but this time we were doing a week together and a week apart. This time we definitely took the work away, then reconvened and kept the best ideas and trashed the rest. We all had to learn to accept that fact that your idea might not be the best idea. We’re quite good at it; we don’t come to blows but we might disagree now and then. Musically, I think the sound has come of age. We know what our sound is, but we also feel allowed to not just be a blues-rock band or just a heavy band, and our audience will allow us to continue to experiment in a few different directions. It’s more of a challenge to be able to play the new songs; we’ve written some that are quite tricky and are just at the edge of our ability. We challenge ourselves, and the first few times we play them live are seat-of-the-pants moments, but once you get over the first couple of times the confidence grows and it becomes more natural. Once we get our teeth into them, it’s really great. The record comes out soon and the songs know it; I think the songs are onto us. But there’s a certain buzz about playing tunes for the first time in front of people, and that’s part of the thrill which we’ve enjoyed so far. There are a couple of tracks we haven’t done yet too, so we’ve still got a couple of those moments left.”

Despite the obvious benefits of having new songs to play live, Marsden admits the expectations the band put on themselves to write the best songs possible is the driving force behind the band.

“We give ourselves our own pressure,” he says. “Outside pressure doesn’t even get a look in. We’re really proud of the two records we’ve made and we loved working with [producer] Ian Davenport on those records, but we set the bar higher this time. If a song isn’t as good as something you’ve done before, then it basically isn’t good enough. Recording is an amazing experience, although it’s not easy. There are a lot of long hours, and it can be relentless and the hours are gruelling. It can wear you down and drive you insane. It’s a bit like sitting an important exam, where the result is going to affect your life in the future, but seeing ideas that you have in your head realised is a thrill. When something comes out well in the recording, you can’t help but sneak a thought about how it’s going to sound playing it to people in the future.

An upcoming June tour of Australia is something Marsden is hoping the group can repeat in the near future.

“We’ve been a couple of times now and the audiences are fantastic and really knowledgeable,” he says. “Your festivals are really good as well; you get a lot of international acts coming over. The competition is stiff, and we know it’s not going to be an easy ride, but we’ll be playing some bigger venues for the first time and that’s really exciting. I wish we could come back to Australia more often, but it’s a long way and it costs a lot of money for bands to come over. Hopefully this won’t be the last trip on this record. If it goes as good as we hope, we can maybe come back and do some more cities as we only have three stops this time. Hopefully we can return not long afterwards.”

HIMALAYAN BY BAND OF SKULLS IS OUT NOW. THE BAND TOUR AUSTRALIA IN JUNE.

One thought on “Russell Marsden of Band of Skulls: “It’s a tipping point now””