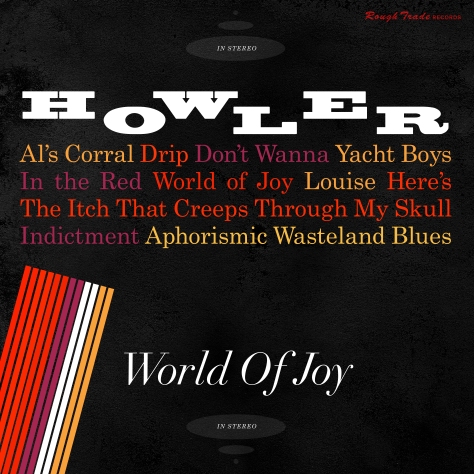 Howler frontman Jordan Gatesmith is clearly and openly obsessed with ’80s college-rock legends and fellow Minneapolis natives The Replacements. Their 2012 debut America Give Up was littered with references to Paul Westerberg’s lyrics and sound, and while the eclecticism and snideness evident on that album compared to Westerberg’s 1987 mixed bag Pleased To Meet Me, this follow up has devolved into something more like the scratchy and patchy Hootenanny of 1983; with even the cover being almost identical. Fifty percent of the personnel has changed since their debut, and while there’s some good stuff here, much of the album feels contrived and lacklustre; and perhaps missing an ingredient or two that would inject a little excitement. The cascading guitars during the first few seconds of opener ‘Al’s Corral’ sound promising before some unimaginative vocal phrasing render it underwhelming. There’s thrashy punk rock brashness on ‘Drip’, ‘Louise’ and ‘In The Red’, while the title track is a fairly forgettable spurt of downbeat lo-fi post-punk. There’s a distinct tail-off towards the end too, with the pop-tinged ‘Indictment’ and folky ‘Aphorismic Wasteland Blues’. ‘Here’s The Itch That Creeps Through My Skull’ is interesting as it veers into lovelorn ballad territory, while single ‘Don’t Wanna’ is the most Replacements-esque track here and benefits as a result. “You don’t have to listen to me if you don’t want to,” Gatesmith sings, which is pretty reassuring by this stage in proceedings; proving that as a songwriter, he has a long way to go before matching his hero’s standards. (Rough Trade)