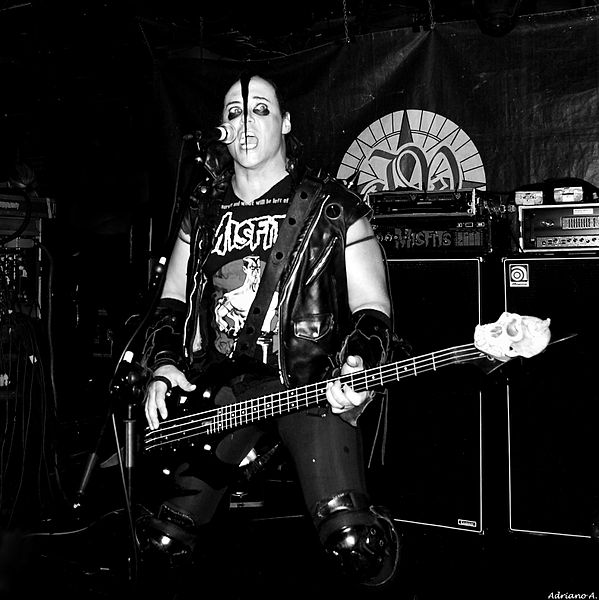 AS iconic and influential a band as you’re likely to find still touring today, horror-punk Godfathers the Misfits are known as much for their genre-swapping music as they are for their Halloween-themed image. With line-up changes, legal battles and reunion tours behind him, bassist/vocalist Jerry Only continues to fly the band’s flag as loudly and proudly as ever. I spoke to the energetic frontman from his tour bus near Pensacola, Florida.

Hi Jerry, how are you? What have you been up to recently?

We’ve been up to just about everything, to be honest, I guess. We have a whole bunch of new releases all in different categories, we’ve been working on our label, and doing a world tour right now. We’re just finishing up the last leg in the United States and then we’re down in New Zealand and Australia after the new year break.

Tell me about the current line-up of the Misfits. Who have you got in there?

The current line-up of the Misfits has been around for going on thirteen years now. We have Dez Cadena, who was originally Black Flag’s frontman, and he was guitarist when Henry Rollins came on board. In 2001, I brought him out as a special guest for our 25th anniversary, he’s been with me ever since, and we’ve been doing some really great stuff together. He adds a dimension to what we do that we didn’t have earlier. He’s very fluent and has the ability to do some very fancy chords and stuff like that; his dad used to run a jazz and blues label. Dez basically grew up around the studio, so he’s got a really great ear, so when we do a cover of Elvis’s ‘Blue Christmas’ he can add some guitar over the top of it that’s still very punk rock, but fits very well with what we’re doing. He’s also working on a thing called Flag right now, which is the original members of Black Flag minus Greg the guitar player, and that’s going extremely well for him. I tell him that he must be a professional musician now, as he’s got more than one gig going at a time! Then we got Eric Arce, or as we call him ‘The Chupacabra’. He joined up with us back in the day when we had some issues and he was in Murphy’s Law, who were on tour with us at the time. When the band kind of melted down in the middle of the tour he filled in for us, and in the early 2000s he kept filling in for Robo every time he had a problem with his Colombian passport, and he would fly in and do the job. He’s young, hungry, and really aggressive with his very strong double-kick drumming, so he gives us this extra element of surprise. Now, we’re right up to speed with the tools needed to pull off some really thrash-y stuff these days. And me, I’ve been doing this shit forever!

What can Australian fans expect from your shows?

We try to be consistent, you know? I mean, for those of you who’ve seen us before, we have some new material which we think is amazing. We’ll be bringing that all with us, and as far as the fans go, they can expect pretty much more of the same. I tell people that every day we get a little better, and one day we’re going to be the best, so it’s a work in progress. It’s not something I’m going to change; I’m not going to try to come up with some sort of new gimmick for you. Our material speaks for itself, and you’re getting what you expect when you come, and we hold no reservations there. It’s just a matter of if you like the Misfits, come on down, and if you don’t, stay the hell home.

I notice you’ve made a Christmas record…

Yeah! I haven’t got one in my hand yet. I’m getting my first one tomorrow, and I’m very excited. I grew up watching all kinds of Christmas shows; as a kid Christmas always started around Thanksgiving, and I’d be looking in the catalogues thinking about what I want for Christmas, and The Grinch would always be in there. We re-did the song for that; it took a little while to figure out the formula to make it really, really cool, but it came out great. Then we did a cover of Elvis’s ‘Blue Christmas’. Now, back in the day when Glenn was in the band we had done a quick spurt of ‘Blue Christmas’ in Max’s Kansas City one night. I always wanted to redo it, and I always thought it was a cool song, and that’s where Dez comes in and shines. If you listen to it, it’s a punk song, but it has all the little Elvis innuendos that really make it amazing. We also did a song called ‘Island of Misfit Toys’; now I don’t know what Christmas programmes you have down below, but we have what’s called Rudolf the Red-Nosed Reindeer, which is kind of an animated cartoon with clay puppets, and they have what’s called the Island of Misfit Toys, where all the toys that have been fucked up, have got something wrong with them, or nobody wants them, or whatever the problem is, go to this island, and this song is based on that idea from that Christmas show. For me, it’s like being a kid in a candy shop again. I get the songs about all the stuff I liked as a kid, and use them, and I’m very happy with it. I was thinking of pumping gas, but this might have changed my mind!

You’re often credited with inventing the horror-punk genre. When you started out, did you have any idea that you were starting something like that?

Well, I’ll put it to you this way. I thought we did the same with speed-metal and hardcore as well. We’re a very diverse band, and our subject matter and our image is definitely a horror and science-fiction based image, but our musical extravaganza is all over the board. We go from songs like ‘American Nightmare’, which is a pure rockabilly Elvis Presley/Gene Vincent kind of a song, to something like ‘Earth A.D.’, which is pretty much the speed-metal bible when it comes down to it. We got songs like ‘Halloween’, we got ballads, we got thrash, we got metal, we got it all you know? A lot of time that leaves us in a position where we’re kind of in a class all of our own; it’s really hard to lock us down. A lot of people tag that horror-punk thing on us. Are we a horror-punk band? Of course. But do I think a horror-punk can sustain itself without having great songs? No I don’t. The longevity is in the music, not the look. We’re almost finishing up our fourth decade, we’re going into our 38th year, and my job is to try to keep the band together for fifty. In that time, I’ll build my catalogue to a point where I have stuff all over the place, so when people make movies in the future, they can come back to a Misfits catalogue and pick a really great song that fits any application. I’m not limiting myself to being a horror-punk band. Did we father it? Sure. But we also fathered the Metallicas and the Anthraxes of this world. We have a lot of influences, and it’s based on simplicity and tasteful vocal melodies. I think Glenn really struck a chord when we did something like ‘Earth A.D.’ and he’s really crooning through this stuff, you just realise that it’s a matter of doing tasteful stuff, and I like to think we have a little bit of taste.

What would you like to do in music that you haven’t yet done?

Right now it’s funny, because I kind of covered a lot of things with this Christmas record. Covering ‘Descending Angel’ again, which is a song I wrote for my dad about 1999 when he was sick, and he just passed and didn’t get to hear the song before it came out, is important. I’ve realised the importance of trying to get things done as quickly as you can and not put things off, but the B-side of that is ‘Science Fiction Double Feature’ which I’ve always wanted to cover. We’ve always wanted to do a fifties project; we’ve done that. The new album, I’m very happy with. Right now, I want to go back into the studio and do a lot of the Elvis tracks that I’ve always wanted to do. Also, with the Christmas record, we missed the shelf time for it to actually be bought, and we’d like to get a full-length album out of it for next year, and really go for the Christmas angle with some really cool artwork. We also have images of Marilyn Monroe wearing our T-shirts all over the country now; that’s something I always wanted to do. I mean, if you can align yourself with Elvis Presley and Marilyn Monroe and people like that, I don’t see how you can’t be recognised as a force, you know? And we’re doing it in a tasteful way too. People who see our skull on a T-shirt know exactly what it means, and those who don’t are still attracted to it. It’s like a moth to a flame; we’re just trying to make that flame as big as we can to get as many of those little moths in there as possible.

What are you most looking forward to about coming to Australia?

The only throwback about coming to Australia is the distance between cities, so for us to actually make it economical, we need to fly between shows, so we do kind of come bare-boned. In saying that, if there’s any band out there who can come and take it to the hoop for you guys, it’s us. We’d love to come down and do some of the big festivals in the future, where we can bring all our stage gear, lighting and set. At the same time, seeing the Misfits in our raw form is what it’s all about anyway. We haven’t been there in three years, so I think it’s going to be refreshing for those who have seen us, and for those who haven’t it’s going to be an experience. So, I hope that does you!