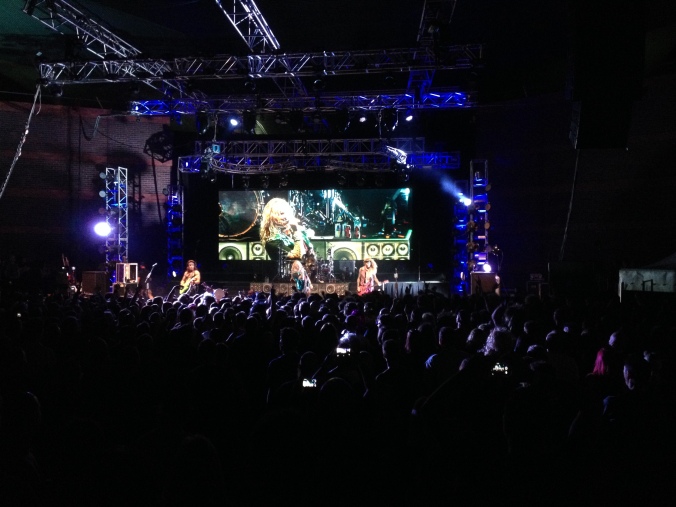 It’s pitch black and the humidity is thick. I can’t see two metres in front of my face, and unseen creatures slither and skulk in the bushes and trees around me. Bewildered by the black summer night, I try to work out which way is best to go, and my eyes strain to pick out shapes of branches and hulking tree roots ahead of me. A sense of dark foreboding shakes my very soul, my ears prick up, and the hairs on my arms stand on end as a heavy rustling approaches from my right. As I tense up and close my eyes to await my fate at the hands/claws/teeth of unknown beasts, a nearby streetlight clicks on and the scene before me becomes clear. It’s a middle-aged guy with a mullet in a Steel Panther T-shirt taking a piss with one hand while slurping from a can of Jack Daniels and Coke with the other. Brisbane’s Botanic Gardens really needs to be better lit after dark.

After my heart rate has returned to normal and a quick set by the Chris Jericho-fronted Fozzy in front of a small but increasing crowd, Los Angeles hard rockers Buckcherry take to the stage. “We’re fucking jet-lagged but we’re here,” announces frontman Josh Todd, before using his fantastic rock ‘n’ roll voice in numbers like ‘Everything’, ‘Sorry’ (dedicated to “all the hot chicks on this continent”) and Icona Pop’s fucking horrible ‘I Love It’. A short blast of AC/DC’s Bon Scott-era ‘Big Balls’ is much more welcome despite an obvious lack of rehearsal on that particular number, as is some of The Rolling Stones’s ‘Miss You’ before the band’s own classic ‘Crazy Bitch’. It’s easy to see why they are often compared to classic hard rock bands like Aerosmith and Guns ‘N’ Roses; they are a classy, tight, straight-up rock band capable of playing big rock songs in style. And Todd’s shirtless abs seem to be a big hit with the ladies and probably a fair percentage of the blokes.

Once the stage is set and the lights are dimmed, it only takes someone backstage to hit the play button on Iron Maiden’s ‘Run To The Hills’ to get the majority of this audience frothing at the mouth for Steel Panther. After a short video of the band playing ‘strip battleship’ backstage, the spandex-clad quartet appear and kick into ‘Eyes of a Panther’.

Now, it’s no secret that Michael Starr, Satchel, Lexxi Foxx and Stix Zadinia (as they call themselves) can really play, as all four members are seasoned musicians and have been parts of various ‘genuine’ metal and rock bands going back decades. In many ways they are more successful than the bands they are taking off, and while some of their music and on-stage banter at first appears to be fun, it’s only when you realise that there’s a large amount of people in this audience taking this shit seriously that things get uncomfortable.

By third song ‘Asian Hooker’, the act is no longer funny. In fact, it’s just plain fucking boring. Steel Panther are often compared to original rock piss-takers Spinal Tap, but the thing about Spinal Tap is that their jokes were well-constructed and smart, and the laugh was always on them. A Steel Panther set is basically the same two or three dick jokes repeated with increasing levels of crudeness, punctuated with calls to the most brazen girls in the crowd to “show us your vagina”. You’d need to be a brain-dead moron to continue to find this shit funny for an hour and a half. Add overt sexism, jokes about paedophilia, and clear racism, and you have one of the low points of live music this reviewer has witnessed this year. Slagging off the likes of Hoobastank and the Goo Goo Dolls I welcome with open arms, but for fuck sake, this band needs to get some new material in the banter department. New songs from their upcoming album like ‘Gloryhole’ and ‘Party Like Tomorrow is the End of the World’ suggest that the themes won’t be changing any time soon.

It’d be fair to ask what the fuck did I expect from a Steel Panther show exactly. The answer would be that the band be far less enthusiastic about the darker parts of their act, and much more satirical with their comedy, instead of relying on the lowest common denominator with which to get laughs. Also, not to be so bored and underwhelmed by long stretches of the so-called ‘banter’, which seemed to exist solely to fill time in many instances. It’s telling to see that the majority of the audience laughing so hard are white males with beer guts, with a large amount of them probably old enough to have seen Motley Crue in their heyday.

After pulling a group of girls out of the crowd and encouraging them to flash their chests at the audience, the band is forced to cut their encore-free set short by the strict 10pm curfew at the Riverstage. ‘Death To All But Metal’ is a strong song on which to finish, but as I make for the exit gates, the crowd bellows “bullshit, bullshit” to a by-now empty stage, and behind my pained expression I’m thinking that I couldn’t have put it better myself.