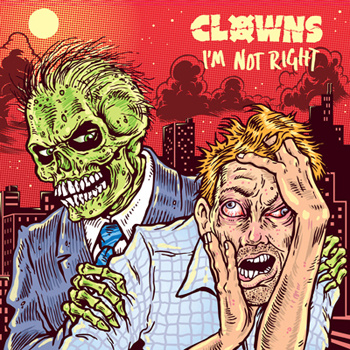 Finding myself at a loss for which band to check out next at the recent BIGSOUND festival in Brisbane, I sauntered into Ric’s Bar where several hairy young men were readying to play. Thirty minutes later, after an intense onslaught of hardcore riffs and throat-shredding vocals, my state of mind could best be described by one the band’s songs: ‘Oh F_ck, My Face’. That band was Melbourne hardcore/punk quartet Clowns, and my semi-melted mug and fragile eardrums haven’t quite been the same since. I’m Not Right is their debut album, and it packs a punch in a similar fashion to that of The Bronx or Black Flag; all sweaty, beer-soaked hardcore and barely-restrained punk aggression. Movie nerds will notice a sound-bite of “Rowdy” Roddy Piper’s voice from ’80s cult flick They Live in 55-second opener ‘Awake’, before ‘Grave Junkie’ explodes with a savagery that is maintained for the rest of the twelve tracks. The album title is probably more autobiographical than is initially apparent, as the lyrics detail subjects like horse tranquillisers, acid, and various powders, and being an outsider on a daily basis, or “every day I wake up late, surround by the same old sh_t,” as the lyrics go on ‘Sheep in Black’. With song titles like ‘Eat A Gun’, ‘Jesus on Acid’, and ‘Rat’, this isn’t going to be an album you’ll play at your granny’s birthday party, but it’s a kick-ass collection of international-quality hardcore and punk that should come with a warning: must be played LOUD. (Poison City Records)