Billed as being for young people by young people, Youth Music Industries’ fourth annual all-ages 4 Walls Festival at QUT boasted quite a line-up this year.

Before a hoard of baby-faced and expensively attired onlookers, local alt-rock quartet Twin Haus provide an early highlight on the rooftop stage with a tidy racket of a set, before English-Australian four-piece Tourism unleash a new batch of Arctic Monkeys-esque tunes with some heavy moments on the main stage in the darkness of QUT’s lecture theatre. During a previous Brisbane gig guitarist Adrian Brown puked on his guitar mid-song, but everyone is clearly under instruction to be on their best behaviour today, which is helped by the lack of bar at the venue. 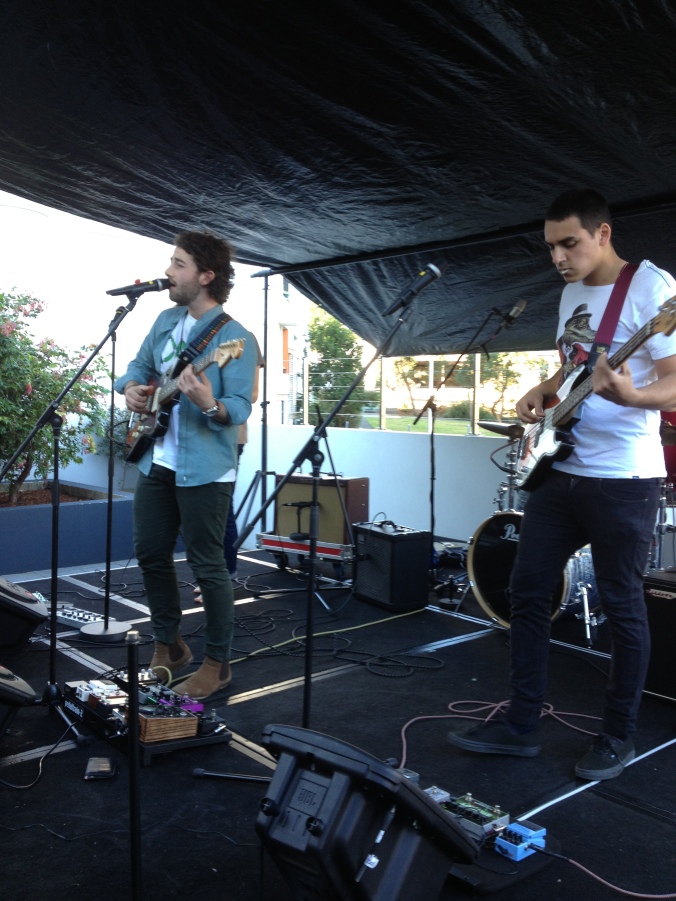 The biggest draw of the day so far is Brisbane’s Go Violets, who almost send a swelling crowd into spasms with their cheeky brand of all-girl indie, with more than a hint of the ‘1-2-3-4’ aesthetic of J-Pop and near-perfect depiction of adolescent angst. With lines like “I really like you, I like your hair”, they could be any teenager here today, and after eliciting proposals of marriage from male members of the crowd, they finish with the Powerpuff Girls theme song. Once they master stagecraft, this band could be huge.

Meanwhile, SURFER CATS are making a boneheaded yet strangely charming mess of noise on the rooftop stage with a set of songs about – yes, you guessed it – surfing and cats, including tunes with names like ‘Vampire Cat’, ‘Catch A Wave With Me’, and ‘Schizophrenic Cat’.

Baseball cap-sporting Jeremy Neale takes to the main stage to thunderous applause, and proceeds to provide the throat-shredding vocal performance of the day, with ‘Winter Was The Time’, ‘Merry Go Round’, and ‘Darlin’ featuring, before being joined by Go Violets and members of Major Leagues to finish with a raucous ensemble version of ‘In Stranger Times’.

Having just driven from Newcastle to make the gig, Pigeon proceed to up the quality tenfold and steal the show with a high-energy blast of electronica, including a ten-minute Daft Punk medley which fuses ‘One More Time’, ‘Around The World’, ‘Robot Rock’, and ‘Harder, Better, Faster, Stronger’ into a single pulsating jam.

Late additions to the bill Cub Scouts headline the main stage with their usual collection of well-crafted indie-pop tunes and send the kids of Brisbane home tired but happy, while the rest of us retire to the nearest bar for a well overdue drink.