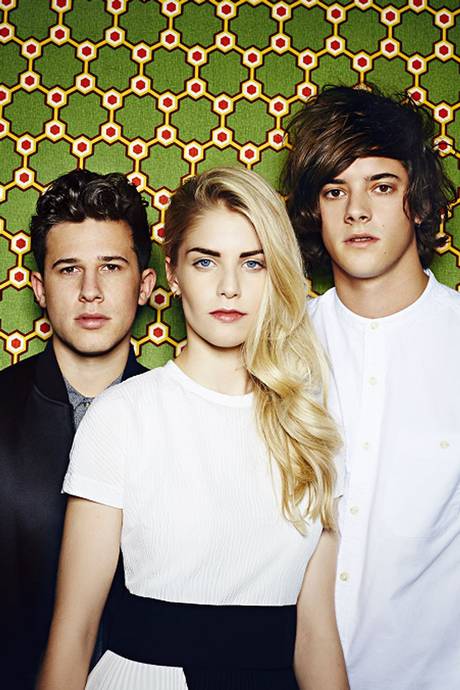 With favourable comparisons to The XX and Florence and The Machine, English art-rock trio London Grammar have barely been making music together for a couple of years, but are already being tipped by some as a band with a big future. I had a chance to chat with guitarist Dan Rothman ahead of the release of their debut album, If You Wait.

Your new album is coming out on September 6th. What does it sound like?

It’s kind of consistent to what people have heard so far I guess. I think that was the idea. We released a few tracks that were representative of the record, as I think we always wanted to make quite a consistent album with a consistent sound, mood, atmosphere, and that kind of thing. That was our intention anyway. There are also a few surprises in there that people might be excited about. It’s quite dark and emotional; I think that’s the warning I would give as well.

Your band has a definite sound that makes you pretty much unmistakeable. Is that something you consciously developed or did it just naturally happen that way?

We definitely developed it consciously in that regard because it’s something we wanted to do, but the fact that we have that specific sound is also a natural development as it’s just what happens when the three of us are in a room together, and we all have different influences which help to make that the case. Generally whether we want to play guitar, sing, or play a song as a whole, it’s really important to have a sound that’s someway recognisable as being our own. And that’s what hopefully separates us from other bands.

Do you sometimes clash over influences?

We’ve clashed a fair few times. Me and Dot tend to have these huge arguments over certain bands which tends to fuck Hannah off for various reasons, mainly having to listen to us arguing. Mainly we argue over The Smiths, as I’m quite a big fan, but Dot despises them.

So, how do your songs come together?

It tends to vary a lot; Hannah has written certain songs on the piano and brought those in and we’ve worked on them from that point onwards, or I’ve brought in guitar parts, or Dot’s brought piano parts, but probably the majority of them – like ‘Hey Now’ for example – were written in a room together in a rehearsal, or in my garage in a jam-like fashion. It does vary; there’s no set format for us.

How was the recording process? Did you enjoy it?

Personally, I really enjoyed it. I think the process for us was long, and it wasn’t quite how I envisaged it; it was quite a choppy process, almost messy and complicated, and I kind of find it difficult to recall what happened, as we spent so much time developing it in different studios, demo-ing it up and getting it to a certain point, and once we had all the songs written, we went into the studio to record the album. From that point I think of really fondly; I really enjoy being in the studio. There’s loads of old gear to look at and lots to learn, but it’s also a bit stressful as we were so concerned about making the right album, so we had arguments over certain choices. It’s a wicked thing to do, and was definitely one of the greatest experiences we’ve had – I think we all really enjoyed it. We spent so much time on the album, and every different part was so arduous that we were so glad to have it finished by the end, and as a result we find it kind of hard to listen back to it now, which is a shame, but it’s just the way we are I guess. I’ve spoken to other bands who’ve had the same feeling after finishing an album, but I think we’re all really proud of it and happy with the final result. When you’re going through the whole process of writing it, producing it, re-producing and re-editing it, and then being involved in the mixing process as well, you’ve heard the songs a thousand times and it’s hard to view it objectively any more.

How do you feel when your band is labelled as an overnight sensation?

It doesn’t feel like that to us, because it’s been such a long process, and it’s even been seven months since we put ‘Hey Now’ out, but a lot of people think that it’s happened really quickly for us, which I guess it has in some ways. I wouldn’t want to disagree with the fact that things have happened quickly for us, and we’re really grateful for it. If people want to label us as that it’s completely fine by me. There was a singer in the ’80s, Paul Young, who said he spent ten years becoming an overnight sensation, so that’s a bit worse than us. His act was just so ’80s, so once the ’80s were finished he was pretty much fucked!

How big a role has the Internet had in your breakthrough?

Pretty much a huge part to be quite honest, although it’s not like one of our songs went viral and had millions of hits or something like that Gotye record did, or ‘Video Games’ by Lana Del Rey. Everything combined – from blogging, Twitter, Facebook – did it for us I think, and a body of stuff on there has propelled it forward.

Touring, lots of promo, and we should be coming out to Australia some time too, although I’d better not say anything, because l got in trouble last time for telling someone we were playing at Laneway and we weren’t!