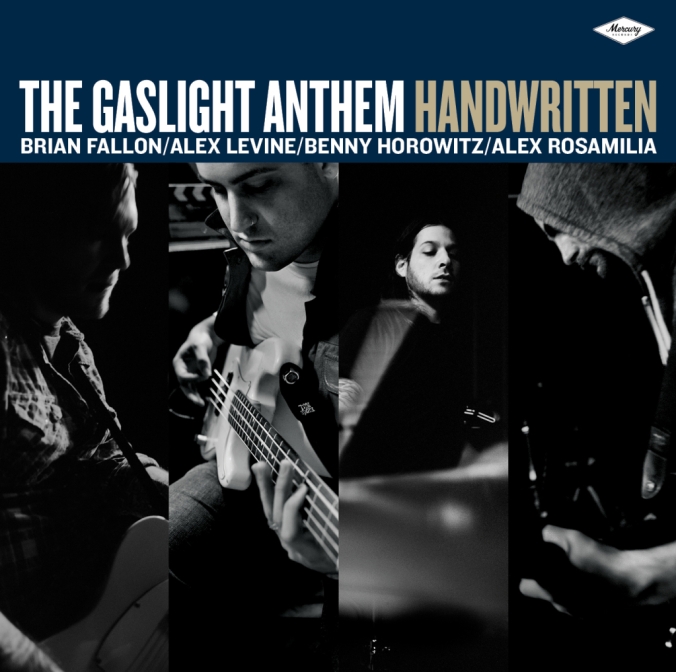 Despite probably seeming like a gift from the heavens, the move to a major label has been a poisoned chalice to many a band; it marked the beginning of the end of the Replacements’ career, and it could even be argued R.E.M. were never the same after they signed to Warner, despite the commercial successes of Green and Automatic For The People. Handwritten is the Gaslight Anthem’s fourth album, and the New Jersey quartet’s first for Mercury Records, but does the change of signature on the cheques mean a shift in style or sound for the blue-collar band?

The answer, thankfully, is no. The production is crisper and the sound bigger than 2010‘s American Slang and 2008 breakthrough The ‘59 Sound, but as Led Zep said, the song remains the same; in this case a straightforward, gritty, heartfelt mix of coming-of-age lyrics, heartache, and an unwavering conviction to playing good ol’ honest rock ‘n’ roll in the vein of their obvious influences Springsteen and Strummer.

Opener ‘45’ gets stuck in with a rowdy urgency and sees singer Brian Fallon asking “Have you seen my heart, have you seen how it bleeds?” in his trademark sandpaper-throated voice, which sounds excellent throughout the entire album. It’s a tight start that harks back to the best moments of The ’59 Sound and should have crowds bouncing on first listen. The title track follows, with guitar lines sounding not unlike those on The ’59 Sound title track, with added “wow-oh-ohs”, hummed harmonies and even some minor piano tinkling in quite a melancholy yet strangely rousing track.

‘Here Comes My Man’ is next and features some sneaky mandolin and a simple Thin Lizzy-esque “oh-sha-la-la” chorus, before ‘Mulholland Drive’ sees Fallon mourning lost love with cinematic grandeur and more than a whiff of aching nostalgia. While the Gaslight Anthem openly embrace the past in terms of musical influences, it seems that Fallon’s does little but haunt him.

Next up is ‘Keepsake’, which lowers the pace but not the intensity; this time it’s family history that’s the cause of trauma. ‘Too Much Blood’ follows – another slow burner with a Faces-style feel, before ‘Howl’ provides a mid-album highlight, as Fallon ponders his fading youth over a pounding, urgent drumbeat and frantically-scratchy guitars, asking “does anything still move you since you’re educated now?” with genuine conversational innocence.

The stomping ‘Biloxi Parish’ is the closest to a love song you’ll find here, while ‘Desire’ sees a return to the “oh-ohhh-oh” choruses and crunching guitars, before penultimate track ‘Mae’ brings the balladry and places Fallon’s perfectly-gruff delivery even more into the spotlight.

Closer ‘National Anthem’ is the quietest track on the album and tugs at the heartstrings in unexpected ways. With lines like “I never will forget you my American love, I’ll always remember you as wild as they come” over a gently plucked guitar and strings, this is the Gaslight Anthem doing early Dylan, and it works beautifully. The quality of the production again plays a part here, as each note sounds clear and crisp as the album comes to a mellow close.

Critics will say it’s more of the same for the Gaslight Anthem, or draw comparisons to what fellow New Jerseyan Springsteen achieved with his first four albums, but they’re missing the point. Very few bands can turn the mundane nature of everyday life into poetry, give it widespread appeal, and do it with integrity. Even fewer can even come close to being compared favourably with The Boss.

In ‘Howl’ Fallons asks “do you believe there’s still some magic left somewhere inside our souls?” On the evidence on show here, the answer is an undeniable yes.