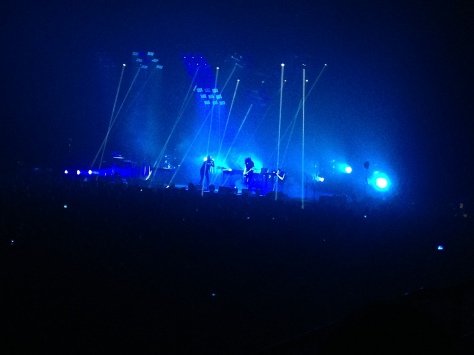 Brody Dalle and her band took to the stage at 7pm just as equal amounts of Queens Of The Stone Age and Nine Inch Nails fans were wondering which band would be first in this outstanding double bill. After a quick 30-minute set of punk rock guitars, that fantastically throaty rock voice and a song dedication to a naked biker spotted earlier in the day, Dalle had the growing crowd’s ears warmed up nicely.

It didn’t take long before everything became clear, as the dark presence of NIN’s Trent Reznor emerged in a haze of purple lighting and he and his band started into ‘Somewhat Damaged’ and ‘Me, I’m Not’. The ominous and sleazy ‘Piggy’ was a highlight, as was ‘Terrible Lie’, during which Reznor – adopting a primal and menacing stance at the microphone – carried off an intensely brutal vocal before throwing his guitar to the air and letting it crash to the stage. Drenched in green light, the band finished with ‘Hurt’, as lighters were raised skyward throughout the audience.

A quick turnaround later, and QOTSA strolled onstage, and by second song ‘No One Knows’ the entire audience was eating out of Josh Homme’s hand. In a groove-laden set, including ‘You Think I Ain’t Worth A Dollar, But I Feel Like A Millionaire’, ‘Smooth Sailing’, ‘If I Had A Tail’ and ‘Fairweather Friends’, the band provided a looser and more relaxed vibe to what came before, with Homme at one point telling security guards “don’t worry about the fucking kids; stop trying to tell us what to do” as a few harmless crowd-surfers were pounced upon. An extended jam at the end of ‘Make It Wit Chu’ was a highlight, and an encore including ‘The Vampyre Of Time And Memory’ rounded out an evening of top-drawer music.

Judging from the similarly rapturous reactions both bands received, it was clear there was a big crossover appeal for fans of each, and while both were excellent and the gig was in no way a competition, Nine Inch Nails just about edged it.