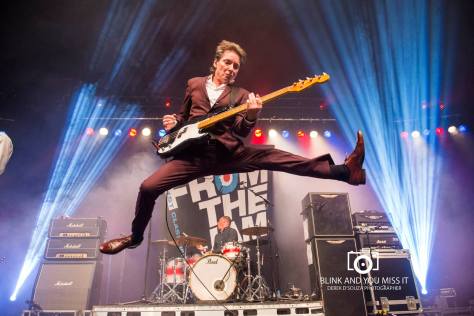 THE JAM was a band of immense talent which did something most others never manage: splitting at the height of its power and fame and leaving fans wanting more. Quintessentially English, yet able to find audiences far beyond its native shores, the band’s singles list reads like a best-of of English rock from the last forty years.

With one foot in the punk scene and another in the mod-rock revival, the band found a larger audience than many contemporaries, and their music is as popular almost four decades later than it was when the original trio of Paul Weller, Bruce Foxton and Rick Buckler bothered the charts with a string of classic albums in the late ’70s and early ’80s.

Now, bassist Bruce Foxton is keeping the spirit of the original band’s songs alive with From the Jam, with vocalist/guitarist Russell Hastings and drummer Steve Barnard. A new album is in the bag and an Australian tour is days away.

Hi Bruce, what have you been up to recently?

It’s non-stop. We had an album out earlier in the year called Smash the Clock. It was co-written with my friend and music partner Russell Hastings and it did very well over here in the UK. It charted; it got to number 31 and number 4 in the independent charts. It got some airplay, which was great, and we’re very pleased. The new material is coming along, plus we’re constantly on the road, which we love. We’re constantly kicking and we’re really looking forward to coming to Australia.

Can you tell me a little about when you realised there was a viable opportunity for this version of The Jam to be a band again?

It goes back to about 2006, when I was playing a relatively local show in Guildford in Surrey at a university. I was in a band called Casbah Club, which featured Simon Townshend, Pete’s brother, on lead guitar and vocals, Mark Brzezicki from Big Country on drums, and myself. We were on the same bill as [The Jam drummer] Rick Buckler’s band The Gift, and I got asked would I play a couple of songs with them, and I jumped at the opportunity. It went down a storm; it was the first time I had played with Rick for about 28 years or so. The crowd loved it and we loved it, and over the rest of the year I did a few more shows with the guys and we did a few more songs. The venues were selling out and there was a lot of interest; two thirds of The Jam was better than one third or none at all, and it has gone on from there. Come 2007, we sat down with Russell Hastings, who was also in Rick’s band, and realised we were having a lot of fun performing the Jam classics again. We got an agent on board and haven’t looked back.

Why do you think The Jam’s music continues to excite and interest people when so many contemporaries fell away?

You’ve kind of partly answered it, as it is very exciting music and it sounds very contemporary. A lot of the hits are still played over here on the radio, and lyrically we had something to say.

Do you think about the fact a lot of the issues in the Jam’s early-’80s lyrics are still relevant today? The issues of class struggle and “too many right-wing meetings”?

It’s sad that there are quite a few things we commented on all those years ago – sometimes naively, but those were our opinions at the time – that haven’t changed in 40 years. You can’t let it get you down; there are more important issues and you just have to keep going.

Do you get sick of being asked about Paul Weller and whether he will play with the band again?

He played on Smash the Clock as we recorded it in his studio. We loved the studio there and it worked for us; it’s very easy going and a great atmosphere. When we were in the studio Paul popped in, we had a hug and a cup of tea and I asked him whether he’d be up for playing on a song or two. He agreed and played a bit of piano on one track and some guitar on another. He did what he does best, and that’s really about as close as we’ll get to playing together. I’d love to play on some of his future material, if I get asked that is. We’re good mates and that’s it. He’s doing very well, and deservedly so. Rick has kind of gone down the author path right now and he seems happy, and there’s a lot happening in my camp and I’m happy. You’re talking about looking back, but we’re all looking forward.

Did you think this reincarnation of the band would last as long as it has?

It’s lasted almost twice as long as the original band. It was just exciting to do. Rick and myself, at the time, really took our time [deciding] on whether it was a goer or not. We didn’t want it to be detrimental to what The Jam were about. We didn’t want it to be a covers band, but when we started to perform again, the – dare I say it – old magic was there and I believe we do those songs justice. We’ve kept going and now the public are bringing their kids to shows. Doing the songs justice [was important], as we probably wouldn’t have even started if it didn’t sound right without Paul.

How do you pick the setlist?

The solo stuff is kind of weird because Russell has co-written the album. I’ll be putting two or three from the album, and although you’d think up against the classics they’d have their work cut out, they seem to be going down really well. Because the album was a minor hit and we’ve got airplay, people have heard it and are well received.

Any chance of a bit of ‘Alternative Ulster’ in there?

No [laughs]. My time with [Stiff Little] Fingers was excellent. I saw Jake [Burns, singer] probably about a month ago now; he had come over here to do a few festivals and we had a hug. We had some good times together and they’re doing well. Ali is back in the band now and I wish them all the luck in the world.

What does the future hold for From the Jam?

We’re not going to leave it as long between albums. We’re going to try to get an album out within the next year or 18 months. I’m still feeling good, touch wood. Our schedule is so busy and when you’re on the road so much, and we need some ‘normal’ time as well; we all have kids and pets etc. It’s like spinning plates or juggling balls, but we hope to get the next album out quicker next time. The next big thing we have is a few shows here, then a week’s holiday, then out to Australia. Busy, busy, busy.

FROM THE JAM PLAY: