The fifth annual Mojo Burning Festival proved that it continues to be a local musical force to be reckoned with at the Hamilton Hotel on Saturday night (14th April).

Positioned as an ‘outside-the-box’ blues, rock and stoner festival, the gathering has gone from strength to strength since its comparatively humble beginnings at the New Globe Theatre in 2014.

Thirty excellent bands over three stages and ten hours is an embarrassment of riches by any festival standard, and almost instant turnaround times between acts kept the momentum going throughout the day.

The Zed Charles Hendrix Experience in the psych room proved to be an early-evening highlight: the balance of showmanship and homage to the songs was just right, and a perfectly blazed ‘Hey Joe’ was a solid closer.

Over at the blues stage, Hat Fitz and Cara let loose a barnstorming set of country/blues numbers, working up a sweat before a baying audience, and climaxing with the stomping ‘Power’.

It was clear that Jeff Martin was a big reason for the presence of many at the festival, and not without good reason. The Tea Party singer-guitarist upped the ante with a solo set of style and class, with some humour thrown in for good measure. ‘Coming Home’, ‘The Bazaar’, ‘Stars in the Sand’ and ‘Line in the Sand’ were mashed up with NIN/Johnny Cash, the Doors and Martin’s heroes Led Zeppelin to make a hard-rockin’ audience happy.

After the intensity of Martin, the light-hearted Henry Wagons was a fun point of difference. The Melburnian, with trademark leopard-print jacket and headband, jokingly teased the audience between alt-country numbers, before getting among them during final song ‘Willie Nelson’. 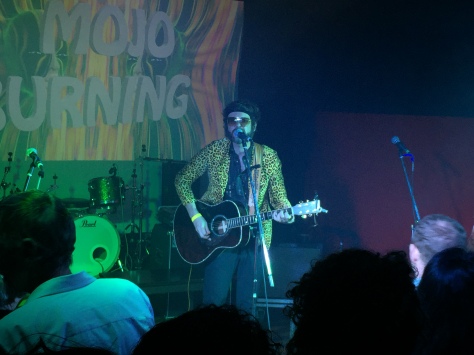 Then came Wolfmother and bedlam. Stockdale and co. still know how to rock, and HARD, and as the rock stage became a barrage of headbanging, big riffs and bigger hair, keeping track of anything became increasingly difficult. ‘New Moon Rising’ and ‘Dimension’ were highlights, as were Stockdale’s wardrobe changes. Everything else was lost in a haze of noise and exhilaration. 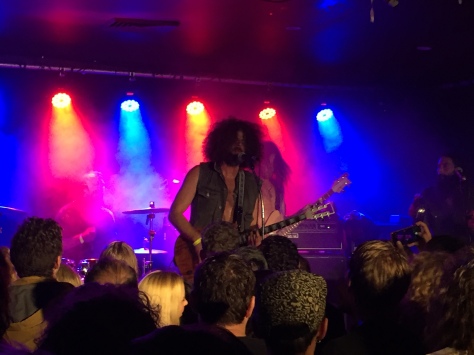 Throughout the evening there was a rail-thin and somewhat bookish-looking guy moving among the crowd, fixing a dark-eyed, intense stare on anyone crossing his path while sipping on a schooner with an almost un-Australian restraint. Seconds after Wolfmother was finished, he (Rafael Cohen, as it turns out is his name) was onstage, having shed his glasses and all restraint in his role as guitarist for Elephant Hive – an Israeli power duo who rocked as hard as anyone at the festival. Cohen and drummer Tom Bollig were spotted by chance by the festival director at a show in Tel Aviv, and will have won many new fans on their first Australian jaunt.

That left Money For Rope (with two drummers in their four-piece setup) and Hobo Magic, switched from the psych room to the larger blues stage, to kill off any remaining eardrums and complete a festival the organisers can be proud of. Consider all mojos well and truly burnt.

It’s been three years since Wagon’s last album, Rumble, Shake and Tumble, but during what seems at first glance like an extended holiday, Wagons’ main man Henry Wagons became a father and made a solo album comprised entirely of duets.

Recorded in his Mornington Peninsula studio with a horde of vintage equipment and Mick Harvey on production and additional musical duties throughout, this 11-song collection – the band’s sixth – has everything long-term fans will expect to hear, and a few surprises to keep things more than interesting.

Ragged Americana, whisky-soaked lyrics and tales of heartbreak from the Victorian coast to the saloons of Nashville are the order of the day, carried off with the flamboyant gusto and cheeky humour that Wagons has earned a reputation for on the live circuit. Heart-wrenchers ‘Beer Barrel Bar’ and ‘Never Going To Leave’ sit smoothly next to galloping sex-and-booze anthems ‘Search The Streets’ and ‘Chase The Eclipse’, and Brisbane’s entertainment precinct is summed up perfectly on the brilliantly loose ‘Fortitude Valley’ with a slight twist on a classic line – ‘women to the left of me, jokers to the right’.

Recording took place with all six band members in the same room à la Bob Dylan and The Band’s The Basement Tapes, resulting in a live feel that makes sure there’s not a bad track or stale moment at any point. This is an album that is simply a pleasure to listen to, from start to finish.

IT’S 11am and Henry Wagons is getting ready to start work, even though it’s his day off.

It’s this work ethic, coupled with a laddish charm and penchant for ragged Americana that the self-styled benevolent dictator of Wagons has made the basis of the Victorian group’s sixth record, Acid Rain and Sugar Cane.

“It’s our first one in a few years and it was incredibly fun to make,” he says. “It took a long time, but I think all of us are happy with the final result. It was long, loud and pleasurable, and I think that comes across in the record. I’m a proud father and very excited for it to get out there.”

Despite the three-year period since the band’s last record, Rumble, Shake and Tumble, Wagons says getting back with the group was just like riding the proverbial bike.

“The main core of the group all went to high school together,” he says. “They’re the people I like playing with the most. It’s like being an amoeba floating around in the plasma, drifting away from the mothership, then locking into the bacterial network again and pumping out the virus and the disease like nobody’s business. Maybe that’s a strange analogy! With the solo record [2013’s Expecting Company?] I had to make every single decision and more or less play everything as well, so I was looking forward to creating a collaborative record again. This record is more collaborative than any we’ve done before; I really leant on the guys. It was good to have more hairy, loud men to aid the cause.”

A reassessment of their approach to recording led Wagons to work out how to allow the band to play to its strengths.

“I had a very particular aesthetic and way I wanted to record the album,” he says. “I wanted to really capture the live element that we’ve got together. Studio environments can make communication difficult when you’re all wearing headphones and listening to separate mixes between separate glass panels. All too often in the studio I’ll be in a vocal booth with an acoustic guitar, I’ll finish the song and there’ll be 30 seconds of total silence where we’re all glancing at each other through our respective vacuum chambers, wondering how it went and gesturing through mime. You’ll hear a crackly producer from three metres back going ‘that was good, maybe do it one more time!’ We’ll be like ‘what the fuck’s going on here?’ So to cut a long story short, I wanted to record in an environment where we’re all in the one room. I’d kind of been listening to the Bob Dylan and The Band record The Basement Tapes, where you can really hear that they’re all recording in one room, kind of shit-faced. It’s not so much the most high-fidelity recording, à la Sting or Pink Floyd. They were there to have a good time and the actual recording is almost an afterthought. I basically ended up recording it at a place I got on the Mornington Peninsula in Victoria, where I have basically loaded in all the vintage gear I’ve collected over the years and set up a studio space. It sounds live, because most of the songs we are all playing together in one room. My vocals come through a PA system in the same room as where the drums are, and it creates this space that I think you can hear in the record. Instead of some elaborate setup, where you’re recording the drums with 20 microphones, the ambience actually comes through the vocal microphone, which is placed six metres away. All the instruments bleed into each other as if we’re on the stage, and it’s a very exciting way to record. I don’t think the fidelity has suffered from it at all. We recorded with a whole bunch of gear I’ve acquired over the years, inspired by Elvis’s late ’70s stage setup in Vegas, so we’ve got a lot of fun old gear.”

Despite the familiarity felt within the band, outside help was enlisted from an esteemed source.

“We were able to take our time,” Wagons says. “We weren’t spending our record advance on studio time, where the clock is ticking every day. What it meant is that we could spend money on recording with people we respect. We had Mick Harvey, the former Bad Seed; he’s done amazing production work with PJ Harvey and did the Serge Gainsbourg stuff. So, instead of spending a thousand dollars a day on some hot-shit national studio or going into Sing Sing or whatever, we were able to bring in geniuses around us; these people we really revered. It took a long time to record, but at our own leisure we’d get together and have four-day getaways. I even had a baby in the middle of the recording process, so it basically came together across six months at our own pace. We were able to just press record when it was all ready to go. The record is quite a trip, quite a journey and the songs take unexpected twists and turns a lot of the time. We were enjoying ourselves too much; we didn’t want to just shit out a three-minute song each time. Mick Harvey’s production style is to join the band, essentially, so he’d be playing drums, keys or percussion on every single song on the record. We had all this money left over to pay to get it mixed at Ocean Way Studios in Los Angeles by the guy who did Edward Sharpe & the Magnetic Zeroes, who have some of the most epic sounding records of recent times. I wanted a dose of that on our record, and he has made it sound incredibly full and incredibly live. It just wanted the average way of blowing your record advance; we were very considered and spent it in a way that made us have a whole lot of fun that translates onto the record. I’d do it again in the same way in a heartbeat.”

While every Wagons album release is an event in itself, the live Wagons experience is on another level.

“The album has a lot of horns and female backing vocals,” Wagons says. “For the big capital city shows, that’s going to be represented on-stage. We’re in the midst of rehearsing the new show as we speak. Because the songs are so live on the album, that energy is transferring well to the live stage. There are going to be a lot of really fun new elements to the show. As it is, I love to interact with the crowd and get amongst it, and this show is definitely going to be no different to that; it’s going to be very loud and very fun.”

ACID RAIN AND SUGAR CANE IS OUT MAY 16. WAGONS’ TOUR OF AUSTRALIA BEGINS IN ADELAIDE MAY 22.