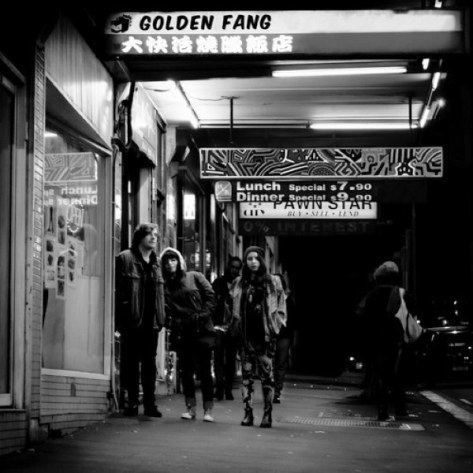 If you’re a fan of pop, punk, garage, rock, girl bands, catchy two-minute guitar songs, or any combination of the above, GET EXCITED – Bloods will make you want to jump around and forget about all the things you probably should be doing with your day. Golden Fang is their debut EP, and with a slew of catchy singles already under their belts, the Sydney pop-punk trio have left behind the days of doing Spiderman theme covers and beefed up their sound, as well as recently signing to Shock Records. While their outer veneer might make them seem a like a trio of snotty kids sticking a middle finger up at the idea of getting a real job or any of that ‘square’ sort of stuff, there’s serious power and musical ability strewn between the bubblegum punk-pop choruses and sneering lyrics, not to mention a solid dose of reckless abandon and a sense of forgetting about tomorrow, or “living for the take” as singer-guitarist MC says in ‘Bodies’. They’re not a one-trick pony though, being just as adept at the slower love song-type stuff too; ‘Back To You’ having the type of direct “You’re the one that I want” chorus that has reverberated through all the best love songs in pop history. The sugar-sweet vocal interplay between singer MC and bassist Sweetie Zamora is what make Bloods so special though, and when fused with instantly catchy punk riffs and a cut-the-crap approach to song-writing, makes their music feel like some of the most essential of recent months. (Shock Records)