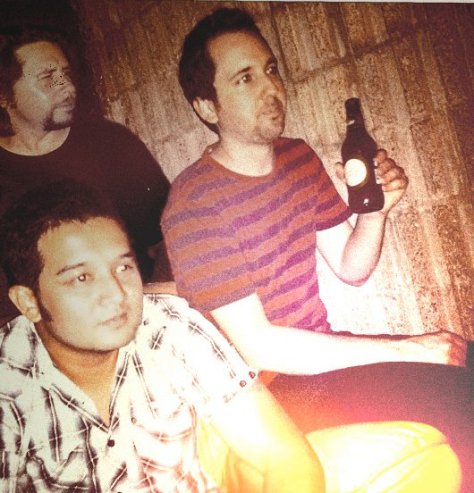 Hi Sonny, you’ve just released your debut album, The Men Who Stole Your Horse Are In The Woods With My Friend. How would you describe the songs on the album?

I think the songs really need to be described as part of the album. And the album I might describe as manically nostalgic. The songs for me really reflect off each other and have a certain completeness when heard together on the album. Its kind of like how without Data’s inventions or Chunk’s big-heart the Goonies would never have found the hidden treasure. And that can only lead to evil developers destroying small sea-side towns. So yeah, in a way they’re good enough.

I’ve always been an albums person and for me there was no other way to put out these songs. Singles seem to be becoming more popular these days but I think eventually people will come back around to the album as the way to listen to music. Or maybe not, whatever.

Tell me about your writing and recording process – is it something you enjoy or something that can prove difficult?

I love writing music which makes it a pretty easy thing to do. I don’t really think about the process too much. The recording process is a completely different animal. Its a self-produced album, so we were doing all the mixing ourselves and you can end up getting quite self-conscious when you’re mixing tracks that you also play on. I think we ended up getting the hang of it and the last few songs we recorded were done in a fraction of the time that it took to do the others.

How does it feel to have your album finished and in the public domain?

Its great having it done and its good to know that our music is somewhere out there in the sub-ether. Although since finishing the album most of my life has been taken up with promoting it, which is a bit up the hill backwards, but its good to know the songs are now on ‘record’ in the literal sense so that we can look forward in a way and perhaps start branching out from what we have been doing for a while now in our live show.

What has the reaction to your album been like so far?

The reaction so far has been good from the people who have heard it, although it would be nice if more people did hear it. The great thing is that these days there’s this under-current of people searching for music that isn’t necessarily heard through major media and so we’re slowly building an audience there, which is cool.

You know, its like those jazz or Cuban music albums that used to be made as short-run pressings for small fan bases. The guys who made those albums were doing it on a small budget and were basically doing it for the love of playing music. So from the outset I felt like that was the sort of album we were making, except with rock music.

Which artists have had an influence on your music, and which do you currently rate?

As a band and as individuals we’re influenced by a whole range of artists and hopefully that comes through in our music. The Ventures are one of those great surf guitar bands that I think heavily influence our sound. Again, I’m into bands that have created great and diverse albums. The Beatles, Bowie, Big Star… and that’s just the B’s. My favourite current artists are probably Dirty Projectors and Okkervil River.

You are playing an album launch show at Black Bear Lodge on 19th June. What can fans expect from your show?

Wow, well for starters I’ve organised a massive LED stage for the audience to dance on, there’s gonna be some pyrotechnics and the whole club is going to be moved to a remote country town for the evening. In fact, we may not even be there, but if we are we will be in robot helmets. I just hope it hasn’t been done before.

If you could share a stage with one artist, living or dead, who would it be?

I’d probably go with a living artist, because you can almost guarantee that things would get a bit messy with a dead one. I did once have an idea of forming a tribute band called The Zombie Beatles, and we were going to play covers like “With a little help from my friends’ brains” and “While my re-animated flesh gently weeps”, so maybe Zombie John Lennon. I think he went vegetarian so we wouldn’t have to worry about the whole ‘eating brains’ issue as long as we kept a few heads of lettuce around the stage. We’d play ‘Rain’ so he could join in on the harmonies in the chorus. Actually, how about dead Bieber?

How do you rate the current scene in Brisbane for bands like yourself? What could be done to improve it, if anything?

There’s definitely a scene. But unfortunately there are only a handful of venues that will actually play original bands which makes it difficult. Hopefully more venues will open up under small bar liquor licences and give bands that have modest followings more places to play. Venues and bands alike need to take more risks. Doing what everyone else is doing is an easy way to guarantee numbers, but nothing great was ever created by maintaining the status quo. Other than ‘Rockin’ all over the World’. People also need to get out and support local music, and see a band they haven’t heard of. It’s also becoming more important for bands to be well organised and plan gigs and releases well in advance.

We haven’t really thought past the 19th June. You can over plan these things.

A CARTOON GRAVEYARD PLAY BLACK BEAR LODGE JUNE 19. THE MEN WHO STOLE YOUR HORSE ARE IN THE WOODS WITH MY FRIEND IS OUT NOW.