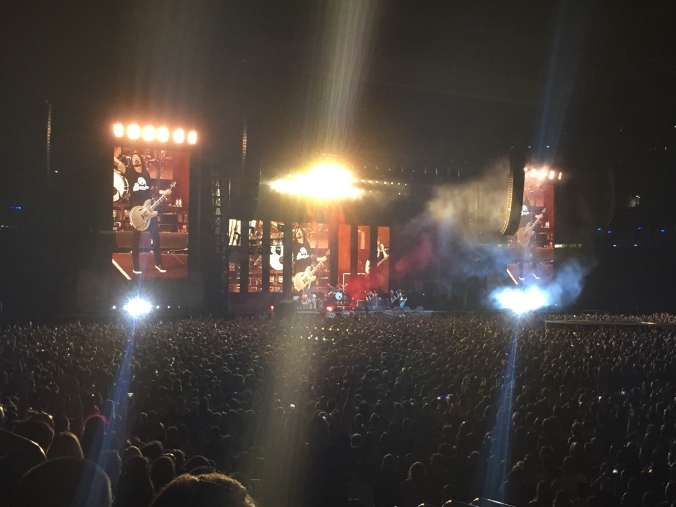 “TONIGHT is the 20th anniversary of the first time Foo Fighters ever played an Australian club gig,” announced Dave Grohl, part-way into his band’s memorable first stop on their Sonic Highways tour – their first show Down Under in four years. “I’d like to thank you all personally for sticking around with us for the last 20 years and for coming out tonight.”

The tens of thousands of fans who turned up at Suncorp Stadium needed no encouragement from anyone to get into the spirit of the gig, and Grohl and co. more than delivered in return, playing two and a half hours of material spanning their entire career, peppered with an appropriate amount of F-bombs, audience banter and classic rock covers.

A subdued open with ‘Something From Nothing’ and ‘The Pretender’ allowed the band to warm up, with notable grins visible on the faces of Grohl and guitarist Pat Smear, before ‘Learn to Fly’ upped the ante and work rate. “We’re going to play until they fucking kick us off the stage,” announced Grohl, which wasn’t strictly true in the end, but it was exactly what the audience wanted to hear. The 46 year-old frontman couldn’t supress a satisfied giggle during the mass sing-along in ‘Breakout’, before he dedicated ‘My Hero’ to “all the old Foo Fighters fans” and then took a second to talk to the crowd about the band’s last visit to these parts.

“A long time ago in a galaxy far, far away, there was a young Foo Fighters band that used to come over and play this really fucking fun show called the Big Day Out,” he recalled. “One time my friend Taylor Hawkins and I thought we would peruse the city of the Gold Coast on our scooters with fucking motorised pedals. On the way back there was a traffic jam. We saw some checkpoint and thought, how bad can it be? Well, ladies and gentlemen, they threw my ass in jail that night. But I learned a lesson: even when you’re think you’re okay on your moped with fucking motorised pedals, they’re going to get you. So when you come back you have to tick that box; you have to explain you were drunk on a vehicle with fucking motorised pedals and that’s why you’re a convicted felon. So tonight, I’m going to dedicate this next song to the hardworking police force of the Gold Coast for teaching me a lesson: don’t spend more on your suit than your fine in court.”

Cue early track ‘Big Me’. The middle section of the set saw the band decamp to the extended part of the stage, where they proceeded to make the year of one particular uber-fan. After covers of The Faces’ ‘Stay With Me’ and AC/DC’s ‘Let There Be Rock’, and despite Hawkins’ best efforts to kick the band into Queen’s ‘Under Pressure’, Grohl halts proceedings, points to one sign-bearing audience member and announces the next song – ‘Tom Sawyer’ by Rush – as being for “the guy with the braces who made the sign on his computer”, before adding “even though nobody likes that fucking song”.

Building to a climax with ‘All My Life’, ‘These Days’ and the enduring ‘This is a Call’, the band seemed genuinely grateful for the love Brisbane showed them tonight, and with the final words “We don’t ever say goodbye, we say this…” before striking the first chords of ‘Everlong’, Grohl sent the majority of the audience into a beer-throwing frenzy. 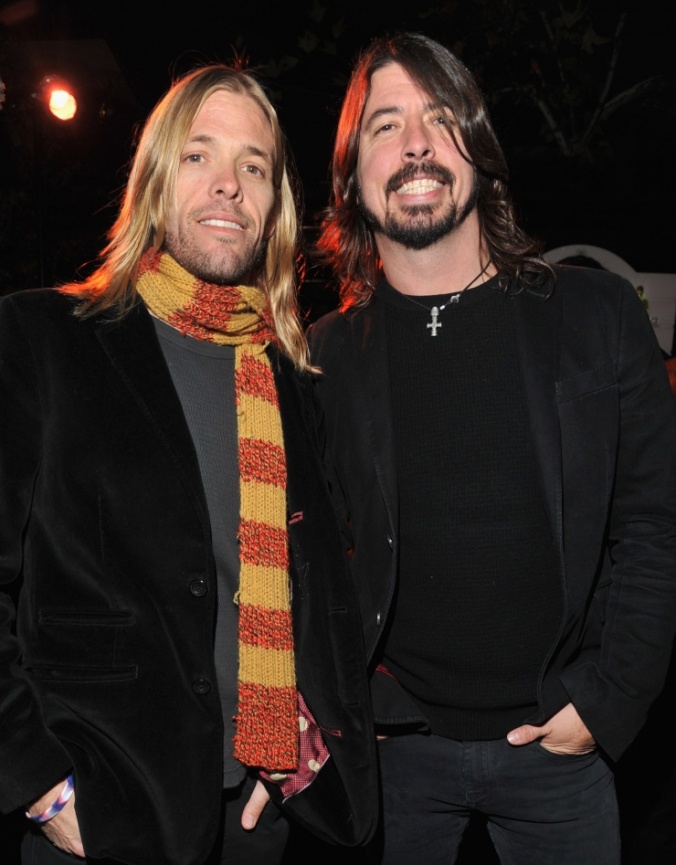 TAYLOR Hawkins might spend most of his time being drummer for one of the biggest rock bands in the world, but when the Foo Fighters take a rest, he doesn’t sit still.

The affable 42 year-old’s new side project is classic rock-influenced trio The Birds of Satan; whose self-titled album is unashamed in its straight-up approach to rock music.

“Wiley [Hodgden, bass/vocals] and Mick [Murphy, guitar] are a couple of buddies of mine,” Hawkins explains. “We play in a cover band called Chevy Metal; we play seventies and eighties rock from when we were kids. I just happened to be jamming with those guys and we always sound good together, and when it came to the time when I wanted to make a record, it felt good and I thought those guys could help me make the record really quickly. We did it and it was great. [The album] was really fun for me, and really easy to make, actually. It sounds like we don’t give a fuck, but sometimes that sounds good, you know what I mean? We did all the music in four days, and then we did the vocals over a two day period. Part of me really wanted to do it quickly, and I wanted it to sound like that. It’s not an [overly] produced record; I’ve done that with the Foo Fighters and I’ve done that with my own band, the Coattail Riders. I wanted to make a raw record. At the time when I was making this record, I was listening to a lot of people’s first records; records made by bands who didn’t have a lot of time. There’s something about that. I mean, listen to the first Black Sabbath record; that was recorded in two days. The first Led Zeppelin record was made in maybe a week or something. Van Halen’s first. All of those records were made in one day to a week. There’s something about that I really like. I like producing records, the layering process and everything, but that’s a whole other sort of trip, you know? There’s something about just getting in there and doing something quick that has a different energy; I like those type of records. Although part of the reason that we made the record so quickly as well was because I didn’t have a lot of time. ”

No classic rock album is complete without a moment of rock grandeur or extended virtuosity, and here it comes in the form of nine-minute opener ‘The Ballad of the Birds of Satan’.

“That took us half a day,” Hawkins says. “We wrote it and recorded it in half a day, and we did another song that day as well, so it happened fairly quickly. We all threw three or four ideas at each other, stuck it all together and it came out like that, which is totally bananas. We set out to make it that way; I wanted to have a track that goes a million places, has weird time signatures and is sort of a schizophrenic kind of song. It was absolutely what I had in mind. I didn’t know how it was going to turn out, but I knew I wanted to do something like that.”

Despite the desire for a rawer sound and the tight time-frame involved, the well-connected California native was able to call on some outside help to finish the album off.

“Dave [Grohl] helped me finish writing a bunch of the songs,” he says. “He was a big part of the first song; the first riff was a guitar riff he had, which we put stuff together with. He was a big part of a song called ‘Wait Til Tomorrow’ and another called ‘Raspberries’. Those were the three he played on, if I’m not mistaken. Pat [Smear] came in at the very end on ‘Too Far Gone To See’ and played some guitar and things.”

With a debut album in the bag, Hawkins is keen to play the songs live, although in what form is yet to be decided.

“We’ve just sort of getting started doing that,” he says. “We played together the other day for a couple of hours, and I think we’ll start playing [the songs] in shows soon, which is exciting. I think that it can fall under the umbrella of other things. These are all songs that I basically have written or have written with other people. There are songs with The Coattail Riders that we could play with The Birds Of Satan. There’s no reason to be precious I don’t think; if we play a Coattail Riders song, it’s fine. I’m not trying to be disrespectful to that band, but I feel like The Birds Of Satan stuff could be played by a bunch of different bands, or by anything we’re doing at that time, you know what I mean? I could have made it with [The Coattail Riders], but it would have been very different. The Coattail Riders are really, really good players. This band are really good players too, but they’re good in a different way. This is the first record Wiley has ever even played on, so he’s hanging on by the skin of his teeth, but I like that energy. Mick is much more of a hard rock guitar player than anyone in The Coattail Riders, so it’s just a different feel. They could have made this record, but it just wouldn’t have been this record. It would have been another cool record for sure, and I probably would have liked it just as much, but it probably would have been very different. Either way, it was going to be made raw, and it probably would have been a lot cleaner with those guys. That’s not necessarily a bad thing, you know what I mean?”

THE BIRDS OF SATAN’S SELF-TITLED DEBUT ALBUM IS OUT NOW.