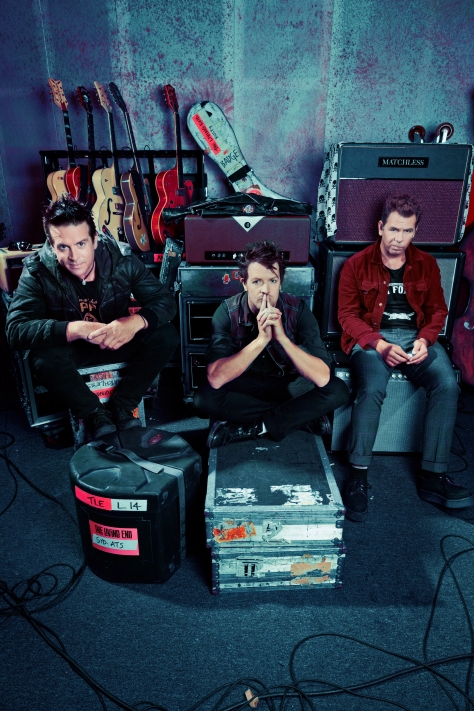 THE LIVING END have just played five Soundwave shows and will headline The Big Pineapple Music Festival next month; not bad for a band technically on a break. Upright bass player Scott Owen explains why the Melbourne trio doesn’t sit still for long.

“Soundwave was fantastic,” he says. “We didn’t know what to expect as it was all very last-minute; we only got added to the bill two weeks before the festival. It was unexpected, but you can’t complain about getting up in front of audiences like that. Everyone seemed to file in there early and there was a really respectable amount of people there. [Short notice] can work either way for us; sometimes we rehearse our arses off before a show and for one reason or another it’s difficult to pull it together, and then sometimes you just have to jump into the deep end without a chance to rehearse, and they can be the best gigs. We went for the middle ground and only had a couple of rehearsals in the week leading up to it, and left it at that; just enough to dust out the cobwebs a little bit, but not overthink it.”

The band will be the top-billed rock act at next month’s second Big Pineapple Music Festival, which also features Dead Letter Circus and Spiderbait.

“Because we’re at a stage right now where we don’t have a new record out, we’re just kind of getting up and trying to tailor our set – and this probably sounds wanky – to please everyone,” Owen says. “We figure with festivals you’re there for a good time, not a long time, so we just try to play things that we think people are going to know and things people can sing along to; I think that’s our job at a festival. We didn’t really think of doing [AC/DC’s] ‘Jailbreak’ until the day of the gig at Soundwave in Brisbane, but every now and then we’ll pull out a cover and it’s normally something that’s planned. We’ve got six albums, so there’s a lot of catalogue to choose from and it can be difficult to try to think of what will please everyone, but that’s why we tend to rely on the songs most people are going to know. It’s not our own show; people are there to see a bunch of bands, so we just try to offer a good time.”

This year marks two decades since the band formed in Melbourne, but Owen isn’t keen to make a fuss of the anniversary.

“We did a retrospective tour the year before last, where we went out and played all of our albums for seven nights in each city, and that was a good way to look back over everything,” he says. “I think we’re more into looking forward than looking back now, although the plan is to do nothing for pretty much the rest of the year, apart from a few gigs here and there, and then sometime next year we’ll get together again and start thinking about the next record. This is the first time we’ve all not lived in Melbourne. Over the last couple of years we’ve all moved in different directions; Chris [Cheney, singer-guitarist] is over in America, I live in Byron and Andy [Strachan, drums] is down the coast in Victoria. There’s a bit of a distance between us and we figured it’s a good opportunity to just chill out for a reasonable amount of time. Fortunately we’ve never had any major difficulties with each other and we’ve been lucky to continue to get people to want to watch us play. I guess we just get along as mates and respect each other, and just enjoy getting up onstage and playing together. I really don’t know how to read it any more deeply than that.”

The band’s sound includes elements of rockabilly, rock ‘n’ roll and punk; a formula that has worked well for the trio, although Owen’s ‘bass stunts’ – primarily standing on his instrument mid-performance – wasn’t always the polished party-piece it is today.

“When Chris and I were in high school we were only interested in’50s rock ‘n’ roll and rockabilly,” he says. “Getting up on the bass was always part of the act; it was happening from day one. The funniest time was when Chris and I started playing; we were only about 16 or 17 years old when we started playing pubs around Melbourne. One of the very first times we played a proper pub – and we were still just doing rockabilly covers at the time – Chris climbed up on my bass to play a guitar solo and it all went horribly wrong and we ended up in a pile on the floor. It was devastating; we were thinking we could never get up onstage and show our faces again after such an epic fail. But we got over the hurdle. Luckily it hasn’t happened in front of an enormous audience.”