Sunnyboys are at the Tivoli and Foo Fighters’ brand of bro-rock is across town at Suncorp Stadium, meaning Fatboy Slim, aka Norman Cook, has some big-hittin’ competition for the collective attention of Brisbane’s gig-goers at Electric Gardens Festival at the Showgrounds.

The question of whether Cook is able to top his triumphant performance at Riverstage exactly two years to the day is another uncertainty hanging over the gig – that was a hell of a show.

Needless to say, the night proves to be business as usual for the EDM renegade master – complete with a typical array of hits, mesmerising visuals, tantalising sonic snippets, air horns and high energy.

After sets by Tim Fuchs, Motez, MK and Gorgon City, panic sets in at the drinks line when ‘Eat, Sleep, Rave, Repeat’ kicks off a couple of minutes before the slated 8:30 start time. After ten minutes of high-quality Fatboy, however, the party is well-and-truly underway.

From here, the master is in control of his disciples.

Brief blasts of ‘Eye of the Tiger’, ‘Seven Nation Army’ and ‘Get Up (I Feel Like Being a) Sex Machine’ get huge responses, as do ‘Renegade Master’ and ‘Star 69’. Two years ago it was Bowie featuring in a brief minute-or-so tribute, and this time it’s Prince; the Purple One’s image on the big screen is a nice touch.

Much like Foo Fighters were probably doing over at Suncorp, Fatboy drops some Queen into his set with a bit of ‘Radio Ga Ga’, as the audience claps when he demands it. It’s not quite Freddie at Live Aid (nothing is), but it’s a lot of fun.

By 9:50pm another hit is well overdue, and ‘Praise You’ does the job, evoking an atmosphere somewhere in the region of bedlam. It only takes ‘The Rockafeller Skank’ mixed with ‘(I Can’t Get No) Satisfaction’ to put the icing on this sweaty, leg-weary cake. 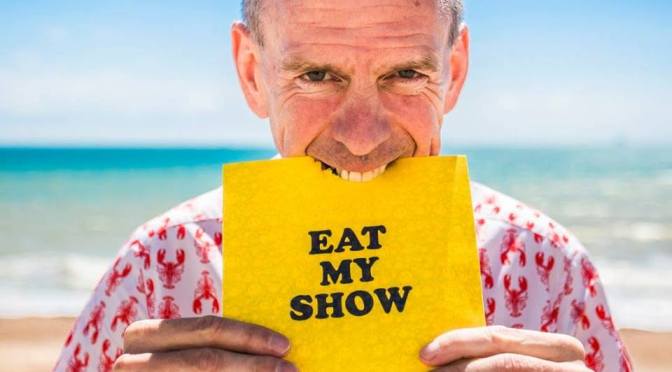 Longevity in the entertainment business is an elusive concept. Slippery as an eel. Statistically pretty bloody unlikely.

Evidence shows that lengthy success requires an artist to either (a) regularly reinvent their showbiz persona and take a punt (see: Bowie, Madonna, Prince), or (b) find something they do particularly well and just keep hammering away (see: AC/DC, The Rolling Stones).

For every rule there are exceptions, however, and it could be argued that Fatboy Slim is pretty unique in that he has done a bit of both.

On one hand, the Englishman has spent over 20 years honing an instantly-recognisable DJ-ing style and hasn’t put out a studio album since 2004. On the other, he’s the guy with an armful of aliases, a continually-evolving method of effecting euphoria, and a back story as interesting and varied as most.

With appearances locked in at the third Electric Gardens festival in Sydney, Brisbane, Perth and Adelaide through January, the bonafide EDM legend is bringing his unique party-starting style (and trademark Hawaiian shirts) back to Australia just two years after his last shows here.

It’s safe to assume he’ll be bringing his A game, as always.

“And that’s always my favourite kind of crowd. It’s also a beautiful country to visit.”

While music-lovers now have a pretty good idea of what to expect from a Fatboy Slim show, it’s been a long journey for the 54 year-old to get to where he is today.

The man also known as Norman Cook has come a long way, baby, since being a skinny, pale Housemartin singing a cover of Isley-Jasper-Isley’s ‘Caravan of Love’ on Britain’s Top of the Pops in 1986 or reinventing The Clash’s basslines for Beats International’s smash ‘Dub Be Good to Me’ at the turn of the ’90s (and the coming of ecstasy).

In 1996, his world changed. The Fatboy Slim moniker was born (a name plucked from “thin air” he told NPR in 2001), he released the triple-platinum-selling You’ve Come a Long Way, Baby album a couple of years later, and a swag of awards and international recognition in the process.

A superstar DJ was born.

The transition required a new persona, meaning he became “like James Brown without the band,” he told The Guardian recently.

“I started cheerleading the crowd and showing off. Whenever I play, I kick off my shoes, put on my Hawaiian shirt and revert to being a 17-year-old who’s had one too many ciders.”

More hit records and a never-ending whirlwind of parties, festivals, gigs, travelling and even more festivals, gigs and parties lead to him not only becoming one of the biggest names in dance music worldwide, but also alcohol-dependent – a situation he didn’t address until 2009.

Sobriety called for further transition so the Fatboy Slim party didn’t suffer. He says a genuine love of the music and his audience keeps him as keen as ever.

“The people I play the music to … keep me inspired and amused,” he told Time Out this year.

“Last year was fun and I fully intend to deliver more of the same. I just try and makes sure there’s a little bit of everything for everyone.

“It’s strange, especially when you travel around, [but] I always have a look at the crowd before I go on to see roughly how I’m going to approach it,” he told Noisey.

Naturally the transition to a sober life was a more serious affair than simply adjusting his approach to a show.

“I kind of lived the life of Fatboy Slim 24 hours a day for about a decade, and it nearly killed me,” he said in an interview with Digital DJ Tips.

“It’s untenable to try and live like that all the time, you’re not a responsible citizen, and you shouldn’t be left in control of children.

“So I kind of figured that the only way I’d do it was quit drinking, for starters, just to give me a bit more longevity, and also just to separate the onstage person from the offstage persona.”

Fans old and new are benefiting from the change too.

“[Sobriety has] prolonged my DJing life,” he told Noisey.

“And my actual life. It’s nice to be 54 and able to jump around at 5am. A lot of that is through being fit. But seriously, the whole thing is just vanity; self-preservation.”

Now a veteran of EDM and a stalwart of the music business, he’s in a good position to assess the scene – with the help of a clear head.

“A lot of the old school DJs are properly weird characters, whereas the new school are young, good-looking, but not hugely interesting,” he told Noisey.

“A lot of them are interchangeable.”

With fire still clearly in his belly and a desire for playing shows stronger than ever, Fatboy Slim is not in the mood to hang up his headphones just yet.

Retirement is an impossibility when he’s only just successfully learned how to separate his onstage and offstage personae, he recently told The Guardian.

“For me, Pete Tong, Carl Cox, we are the first wave of big DJs so there’s no precedent [to retirement],” he said.

“As I get older, Norman’s increasingly obsessed with fridge management and being a responsible dad and husband. He only lets Fatboy out of the box on stage now – Fatboy’s still a lunatic hedonist.”

For someone who has been there from the start to still be at the top of his game more than 20 years later is more than unlikely; it’s almost impossible, and Fatboy Slim’s long and eclectic contribution to music has arguably earned him the right to dictate his own future.

“I’ll step down when either the crowds or I stop enjoying it,” he told The Guardian.

“Neither of which has happened thus far.”

A near sell-out crowd witnessed a bonafide EDM legend’s triumphant return to Brisbane on a balmy Australia Day Eve, as the man sometimes known as Norman Cook proved he’s still the master of his craft.

An opening run-out for local talent Nick Galea was followed by a two-hour set from Erick Morillo as dusk closed around the natural amphitheatre of the Riverstage. “If you’re having a good time, make some motherfucking noise,” the Colombian-American demanded, to massive cheers. “If you’re having a good time and you’re gonna have sex tonight, make some motherfucking noise,” came next, to a much less confident response.

After only a few minutes turnaround, Cook appeared on stage at 8:30pm, and attacked his audience with a non-stop assault of sound for 90 minutes. Such is the length and breadth of appeal of Cook’s career that it could almost be divided into eras, and elements of every one of them got a run out and were met with a similar positive response.

‘Eat, Sleep, Rave, Repeat’ and ‘Renegade Master’ kicked off proceedings, and as Cook moved through a relentless run of his many tracks and remixes, he also found plenty of time to pay homage to his musical heroes, with excerpts of Iggy Pop, Marvin Gaye, the White Stripes, Talking Heads and of course, the Chemical Brothers thrown in for good measure. A couple of well-appreciated Bowie tributes were nice touches, including mashing ‘Rebel Rebel’ into the mix, and the light show would have worried every epilepsy sufferer from Southbank to the Valley.

The only way to finish was, of course, his signature tune, ‘The Rockafeller Skank’. As the vast, happy audience poured out of the Riverstage, Fatboy Slim had to be given major credit for raising a valid question: when was the last time so many happy Brisbanites came together and danced their socks off on a Monday night?